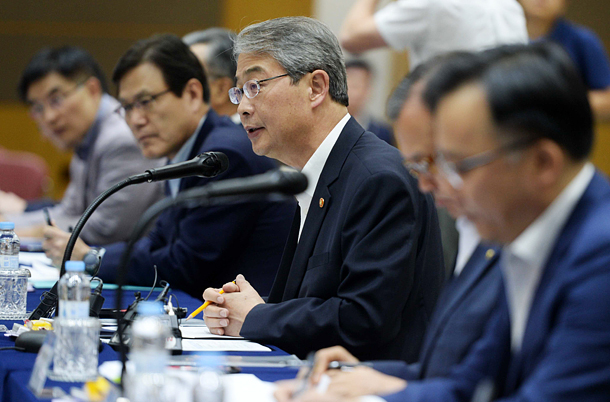 Financial Services Commission Chairman Yim Jong-yong said the government will take additional action if measures announced last week to curb the rapid rise of household debt, fueled by a boost in the real estate market, do not work.

The comment came after some analysts said the government’s measure will have little impact as long as the real estate market, which has been sluggish in recent years, hums along, especially with redevelopment of apartment complexes in Gangnam. Some said stronger measures were needed.

“[The FSC] will execute the plan that was recently announced,” Yim said Monday during a meeting of the finance industry reform committee held in Yeouido, southwestern Seoul.. “Then we will dispassionately assess the outcome and correct the plan [if there are any problems].”

The FSC chairman, however, acknowledged critics’ view that more should have been done.

“I know that the market was disappointed because they expected controls on mortgages,” he said, “But the latest measures are aimed at addressing a fundamental cause of the rise in group loans by controlling the supply of new residential units.”

Syndicated loans are taken out by a group of borrowers buying newly built or redeveloped apartments. Financial institutions offer lower interest rates than on individual mortgages. The credit evaluation process is less restrictive.

Such loans only accounted for 12.4 percent of mortgages issued at the end of last year. Now they account for 49.2 percent and total 11.6 trillion won ($10.3 billion).

Household debt including credit card debt now stands at over 1,257.3 trillion won, an all-time record. Analysts project that at the current pace, the figure will exceed 1,300 trillion won by the end of the year.

“As the household debt management measures were mostly made from the macroeconomic standpoint, it won’t have a huge impact in contracting the real estate market in the second half,” said Kim Min-young, a Budongsan 114 researcher.

The real estate market shows little signs of cooling off.

According to a real estate information provider, the price of residential units sold in Seoul last week rose 0.19 percent compared to the previous week. That was the same weekly increase as the last week of June, which was the sharpest weekly growth so far this year.

A survey by the Bank of Korea showed that real estate analysts expect the current momentum to continue until the first half of next year. The disparity between the real estate markets in greater Seoul and provincial areas is expected to widen.

In a survey of 94 real estate analysts, 68 percent said the redeveloped apartment price in the greater Seoul area will likely see an additional hike, with 52 percent saying the prices will increase between 1 and 3 percent. Additionally 31 percent speculated that these apartment prices will likely see an increase of more than 3 percent. That’s a stark contrast to experts saying that the national average real estate price will increase less than 3 percent.

More than 60 percent expect the provincial real estate markets to slow especially in both Gyeongsang provinces as well as in Chungcheong and Jeolla.

The survey was conducted between July 19 through Aug. 9 and doesn’t reflect the government measures announced last week.