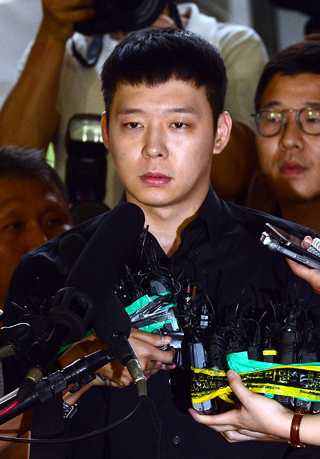 The 24-year-old accuser of singer-actor Park Yoo-chun has been indicted for false accusation and blackmail, according to the Seoul Central District Prosecutors’ Office on Monday.

In addition, the female accuser’s male cousin, 33, who is a member of a gang, and her 32-year-old boyfriend have been charged without detention for blackmail.

The 24-year-old accused the celebrity in June, claiming that Park sexually assaulted her in a bathroom located at a bar. However, she soon dropped the charge a few days later.

In response, Park countersued against the three accusers, revealing that they demanded 500 million won in ($448,000) settlement money. The police found that the three accusers met several people from CJeS Entertainment, which represents Park, and threatened to make Park and the female accuser’s sexual intercourse public if they didn’t give them the money they demanded.

The court took Park’s side in July, saying that it is difficult to prove that the TV personality used threats or violence to engage in sexual activities, as the woman claimed.

Park was accused by four women on rape charges in June, and the 24-year-old was the first. The police are still carrying out investigations of the three others that accused Park of rape.