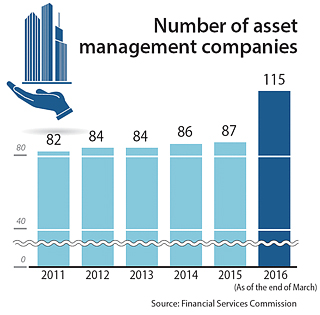 Until recently, financial companies were required to have only one asset management unit under one financial group. But the Financial Services Commission, the nation’s financial regulator, reversed course and began allowing companies to establish multiple units starting this month.

Samsung Asset Management, the country’s top asset manager with total investment amounting to 1.2 trillion won ($CONV NEEDED), was one of the first to jump on this change, announcing earlier this month that it would spin off some its investment business into two subsidiaries.

Samsung Asset Management will remain the holding company of both subsidiaries with a 100 percent stake. It will also manage the rest of the products including bonds, index funds and exchange-traded funds.

The new corporate structure is due to be introduced next year.

“To better operate each division, we thought that separate management would be more efficient.”

The spokesperson added that the new corporate structure could also help Samsung adopt a separate system for personnel management and salary payment instead of a uniform structure across the board.

The active fund unit will have a starting capital of 30 billion won, and the hedge fund affiliate will start with 10 billion won.

While Samsung is emphasizing the anticipated advantages of the change, some market watchers say the spin-off could serve as a maneuver to easily close or scale down the active fund division later, a segment that often delivers negative returns.

The spokesperson declined to give a direct answer on the view, saying that the split will make the active fund division more competitive.

The hedge fund unit, on the other hand, is expected to receive a boost, as the sector enjoys growing demand and handsome yield rates.

The size of the local hedge fund industry has grown fivefold to an estimated 5.3 trillion won in investment as of the end of July, thanks to investors seeking higher yields due to record-low key interest rates.

The growth is also being helped by the government easing regulations on hedge fund investment by reducing the minimum capital requirement.

In addition to Samsung, Truston Asset Management said it has also filed an application with the Financial Services Commission to set up a unit specializing in hedge fund management.

In line with the shift, the company recently hired high-profile investment experts including Lee Yoon-pyo, who formerly worked at an alternative investment division at the National Pension Service.