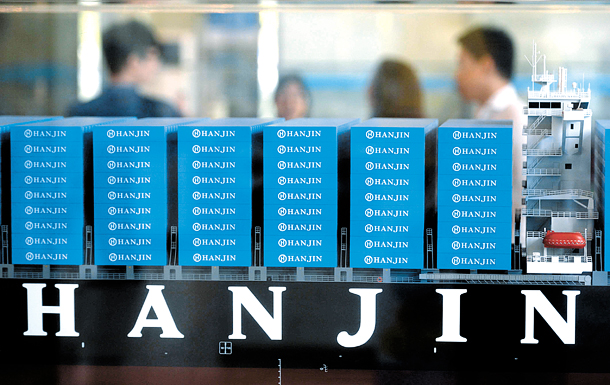 A miniature model of a Hanjin Shipping vessel carrying cargo, displayed at the shipping company’s office in Yeouido, southwestern Seoul, on Monday. [NEWSIS]

Foreign financial institutions, including those from Germany and France, agreed to extend more help to the struggling Hanjin Shipping Co.

Still, the Korean shipping company could be forced into court receivership early next month as its main creditor Korea Development Bank (KDB) continues to press Hanjin Group to cough up 1 trillion won ($890 million) as part of the reorganization plan.

Germany’s HSH Nordbank, German financial institution Commerzbank and France’s Credit Agricole Bank sent an e-mail to Hanjin Shipping on Saturday stating that they will extend their loans to the shipping company. This is a turnaround from their previous stance where they would extend the loan only if its main creditor KDB would guarantee the loans.

These three lending institutions are among the five that have loaned Hanjin Shipping money. Extending the loan for another three and a half years would be equivalent to the Korean shipping company securing 128 billion won.

If the 24 other creditors follow suit, Hanjin Shipping will be relieved from the burden of immediately paying up 470 billion won.

Seaspan Marine Corporation, which charters the largest number of ships to Hanjin Shipping, has also agreed to lower its charter fees, saving the shipper about 800 billion won.

However, the shipping company’s main creditor KDB remained steadfast in demanding that Hanjin Shipping’s owner Cho Yang-ho contribute more than what he has proposed, adding that “nothing has changed” even with successful negotiations with foreign lenders and charter companies.

“When we estimated the additionally needed capital [between 1 trillion won and 1.2 trillion won] we have already factored in the extension of the loan [from foreign institutions],” said a KDB official. “The negotiation [with Hanjin Shipping] will be difficult to continue if Hanjin Group does not bring up minimum 600 billion won than its initial self-rescue plan [with 400 billion won].”

If so, the creditors who lent 3.2 trillion won with the company’s ships as collateral will retrieve their investments by selling the collateral. The remaining assets will then be split between the local commercial banks that loaned 1 trillion won and corporate bond investors, which the shipping company owes 1.2 trillion won.

Among corporate bond investors, 430 billion won are primary collateralized bond obligations (P-CBO), which means that these investors are promised of their principal investments.

If so, the Korea Credit Guarantee Fund that has vouched for the corporate bond would have to lose its principal payment.

If Hanjin Shipping is dismantled, it is expected to inflict damages of 17 trillion won on the local shipping industry, according to a study by the Federation of Korea Maritime Industries.

Additionally, the 1.2 million containers at the docks are worth $14 billion. The cargo owners are planning to sue the shipping company.

More than 2,300 people could lose their jobs as a result.

Hanjin Transportation, an affiliate of Hanjin Group, has been buying up core assets of Hanjin Shipping. Although Hanjin Group has said the purpose is to convert the group into a holding company while securing liquidity backup for Hanjin Shipping, some of the creditors sees it as diverting valuable wealth in preparation against court receivership.

Hanjin Transportation has bought 235.1 billion won worth of Hanjin Shipping assets since May last year, according to the Financial Supervisory Service. This includes acquiring the 68 percent stake of Pyeongtaek Container Terminal, worth 14.5 billion won, and Hanjin Newport’s 50 percent stake worth 135.5 billion won.

In June Hanjin Group purchased the sales rights of eight Asian shipping routes, including Southeast Asia as well as Japan and China and in July it purchased a 21.3 percent stake of Tan Cang Cai Map International Terminal in Vietnam for 23 billion won.

Under the nation’s antitrust regulations, the holding company Hanjin Kal has to either own 100 percent of stake of the grandchildren company, which in this case is Hanjin Shipping, or sell all of its stakes.

However, the some of the creditors question Hanjin Shipping on whether it was the right move to sell off the shares that are lucrative businesses.

Some of the creditors argue that Hanjin Shipping should have been cautious in selling such businesses to improve its fiscal structure.

But as Hanjin Transportation bought the rights, even if Hanjin Shipping goes into court receivership and therefore kicks out of the international shipping alliance it is under, Hanjin Group will still be able to protect its sales rights.

The creditors led by KDB see that Hanjin Group has been reluctant to revive Hanjin Shipping, since it has not made many changes to its self-rescue plan, although the negotiations with the creditors have been extended for a month until Sept. 4.