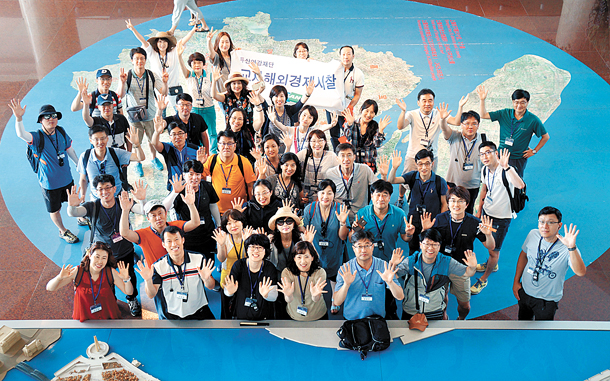 Doosan is holding a variety of social contribution activities to “co-exist with neighbors.” The company has defined corporate social responsibility (CSR) as their fundamental duty.

One of Doosan’s major social contribution activities is “Doosan Day of Community Service,” during which the executives and staff members of Doosan around the globe simultaneously take part in volunteer activities in the local communities of each office.

This year’s event was held on April 15, and approximately 8,000 executives and staff members from over 20 countries participated. Volunteers in Korea built furniture for low-income households, visited the underprivileged and did environmental clean-up activities. Donations for children in the United States, repair work for local welfare facilities in a number of European countries, improvements in schools, welfare centers and low-income households in India and Vietnam were also carried out.

“Time Traveler,” one of Doosan’s CSR programs to help out youth in need, had been selected by the Blue House and the Ministry of Strategy and Finance as “an exemplary case that contributes to the happiness of the people.”

Since 2012, “Time Traveler” has helped out youth suffering from emotional distress due to living in poor surroundings. By promoting emotional development activities such as observing their everyday surroundings through pictures and listening to the stories of other people, participants grow in understanding themselves as well as others.

Doosan’s CSR activities do not end here. In 2006, Doosan installed water-purifying facilities in Cambodia and in 2012, constructed sea water desalination installations in Vietnam. In Indonesia, where there is a shortage of experienced technical professionals, the company has opened a technical institute that carries out programming education for a machining center and a turning center.

Doosan is also putting effort into improving educational and medical environments. It established 26 “Project Hope Schools” across China from 2001 to 2012 and in Indonesia, it is carrying out the “Wish Tree Program” to improve elementary school education in poor districts. The company holds a variety of medical volunteering work to benefit locals in Vietnam as well.

Doosan Yonkang Foundation was established in 1978 to follow the aspiration of the first chairman of Doosan Group, “Yonkang” Park Too-pyung to develop his nation through education. The foundation currently gives out scholarships, academic research funds, books, as well as opportunities for teachers to study abroad.