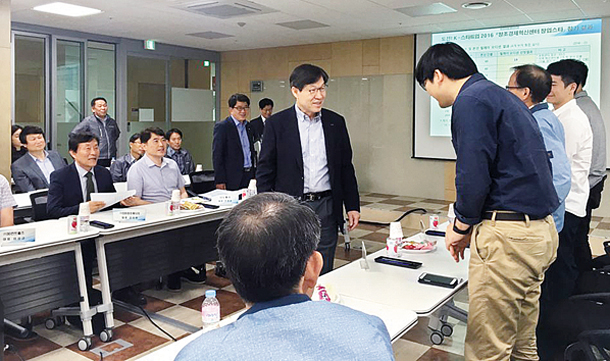 Kwon Oh-joon, CEO of Posco, visits the Pohang Center for Creative Economy & Innovation on June 15 to hold a meeting with CEOs of start-ups. [POSCO]

A notable example of this movement is the implementation of benefit sharing, a system that carries out improvement activities with the suppliers and share the benefits arising from it. As a result, it became easier for growing companies to improve their structure and achieve technical development.

Meanwhile, since 2011, Posco has been supporting start-ups and job creation through holding an “Idea Marketplace” where idea proposers, investors, and professional advisors participate in buying and selling ideas that have potential to become new businesses.

The company opened Creative Economy Innovation Center in Pohang and Gwangyang in order to contribute to the success of the creative economy as well as create jobs in the region as well.

As part of efforts to achieve a win-win environment, Posco will work to make sure the positive effect from mutual growth activities for suppliers directly in cooperation with Posco could also trickle down even to second or third tier suppliers.

Posco established a win-win payment system of its own called “Posco WinC.” If Posco’s first tier suppliers make use of Posco WinC system, it will improve conditions for price settlement between the two suppliers, as the payment for the second tier suppliers could be made the same day as the first tier suppliers. Before running this system, the second tier suppliers had to wait an average of 60 days for the payment after the transaction. In addition, the company will continue its support in fostering small-sized hidden champions. Posco will give out funds for R&D of growing companies to help them focus on their technological development.