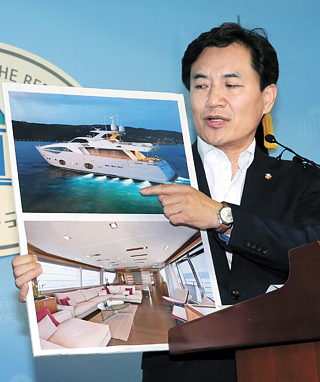 The ruling Saenuri Party lawmaker who publicly accused a top journalist of receiving bribes from Daewoo Shipbuilding and Marine Engineering (DSME) in 2011 - while failing to mention his name - stood in front of news cameras for the second time Monday and revealed names.

Saenuri Party Rep. Kim Jin-tae told reporters at the National Assembly’s press room that Song Hee-young, 62, former chief editor of the Chosun Ilbo, was the senior journalist who traveled around Europe for nine days in September 2011 on a jet chartered by DSME, a trip that cost at least 200 million won ($178,000) for accommodations, transportation and dining.

The flight alone would have cost around 89 million won, he said. The whole package was in exchange for writing articles favoring the debt-ridden company, Kim claimed.

Park, Nam and Ko are all currently under arrest for their involvement in DSME accounting irregularities.

Song stepped down as chief editorial writer of the paper just hours after Kim made his second announcement.

The journalist did not acknowledge the bribery accusation, however, saying the “truth will be told” eventually. 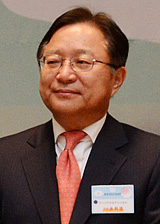 Song had adamantly denied he was bribed last Friday in a statement released by the Chosun Ilbo, saying that he traveled to Europe to cover Greece’s debt crisis.

Kim said Song’s itinerary covered the finest tourist attractions in Italy, Greece and Britain, and he travelled in a luxurious private plane and a yacht.

“I wonder why he had to cover the Greek debt crisis on an ultra-luxurious yacht or a golf course,” said Kim. “I did say last week he committed a ‘moral hazard,’ but I think he’s gotten away with way more than that.”

One unanswered question is how Kim was tipped off about Song’s involvement, and why he was dredging up scandal from five years ago. When the lawmaker revealed to reporters the Korea Development Bank documents he referred to, the participants were only referred to as “VVIPs.”

“I got data from here and there,” Kim said vaguely. “The Korea Development Bank wasn’t that cooperative in submitting the papers. I can’t reveal my sources, but I’m still getting lots of information from people.”

The main purpose of the disclosure, he said, was to make Song take legal responsibility for his transgression.

Kim brushed off the main opposition Minjoo Party’s accusation that the ruling Saenuri Party was trying to overshadow the ongoing probe surrounding Woo Byung-woo, senior civil affairs secretary to the president, who’s being investigated for embezzlement and abuse of authority.

“This has nothing to do with the Woo case,” pressed Kim.