Summer of ’16 was a hotbed for diseases

Summer of ’16 was a hotbed for diseases 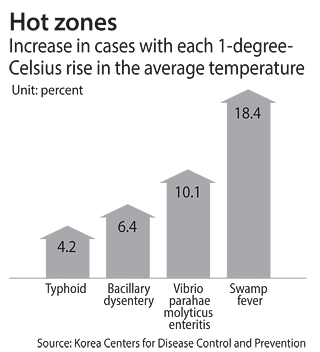 Korea’s record-breaking summer heat led to the return of a disease that had virtually disappeared, cholera, and outbreaks of hepatitis A, malaria and even deadly fever infections from mites.

The August heat in Seoul topped that of 1994, a summer long remembered as the hottest in Korea’s history. The average temperature in the city in August 1994 was 28.2 degrees Celsius.

On top of heat-related illnesses like sunstrokes and dehydration, the heat wave brought back a disease long forgotten by many in Korea.

Domestic cholera infections came back this summer for the first time in 15 years. Health authorities confirmed on Thursday the second domestic case of cholera only two days after a man was announced as the first since 2001.

Both patients contracted the disease after eating raw fish in South Gyeongsang. Undercooked seafood is a main source of the Vibrio cholerae bacterium, which causes cholera. The disease spreads via infected fish, or food and water tainted by the feces of an infected person, and thrives in warm waters.

“The sea temperature off the coast of Tongyeong, South Gyeongsang, increased 5 degrees Celsius compared to its average temperature from 2006 to last year,” said Jung Ki-suck, director of the Korea Centers for Disease Control & Prevention (KCDC). “Experts see this as the reason for cholera returning to Korea, spreading via infected fish.”

According to the World Health Organization (WHO), the overall fatality rate for cholera is only 1.17 percent in 2014. But without treatment, it can kill within hours. Symptoms include diarrhea with severe dehydration.

Climbing temperatures directly affect disease outbreaks. With a 1-degree-Celsius rise in temperature, the outbreak rate for malaria in Korea rises 17 percent, tsutsugamushi (a form of typhus spread by mites) by 13 percent, and swamp fever by 18 percent, according to a lab study by Lee Eun-il, professor of Korea University College of Medicine.

In the sweltering heat, hepatitis A patients increased threefold, with 3,331 patients infected this year. This is 3.4 times the yearly average from 2013 to last year.

Hepatitis A is a liver disease transmitted through consumption of contaminated food or water or through person-to-person contact. According to the WHO, most people recover from the disease with lifelong immunity.

While the summer heat is subsiding, medical experts say it’s no time to relax.

“In the fall, people should look out for diseases born by insects,” said Eom Joong-sik, doctor of infectious diseases at the Hallym University Medical Center.

Severe fever with thrombocytopenia syndrome (SFTS) is one of them. Thirty-four people were infected with SFTS this year, of whom five died, according to the KCDC. People are cautioned against sitting on grass from April to November.

The number of malaria patients also spiked this year, with 524 people infected compared to an average of 456 patients in the past three years.

The KCDC announced last week that the West Nile virus, which is born by mosquitoes, is on a national watch list of new infectious diseases. In the United States, 2,175 people were infected last year, according to the U.S. CDC. It said 146 of them died.

A research team at Seoul National University College of Veterinary Medicine announced last year that it found 11 wild pigeons infected with the disease in Korea.

According to the KCDC, the symptoms of the West Nile virus are similar to a common flu, and include fever, headache, lethargy, muscle pains, nausea or diarrhea. The virus can be lethal when it invades the nervous system and develops into a West Nile encephalitis or meningitis.

“With the rising temperature throughout the world, diseases born and carried by insects will only increase in number,” said Jacob Lee, a doctor of respiratory infectious diseases at the Kangnam Sacred Heart Hospital. “A meticulous monitoring of host insects like mosquitoes and mites, as well as expedited vaccine development, is needed now.”

The National Assembly’s Health and Welfare Committee met Monday to investigate the state of health and sanitation regulations in the country.