Ji could be tip of the spear for Korean squad

Ji could be tip of the spear for Korean squad 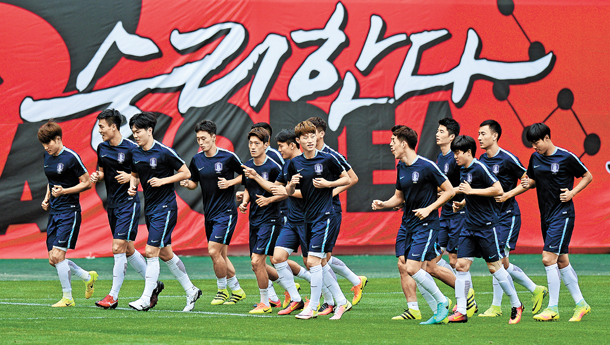 The Korea national football team trains at Seoul World Cup Stadium in western Seoul on Monday to prepare for the coming match against China. [NEWSIS]

With only one day left before the opening match of the final Asian qualifying round for the 2018 FIFA World Cup, the Korean football team is in the final count down. Korea, ranked 48th in the latest FIFA standings, will host China, ranked 78th, on its home turf at the Seoul World Cup Stadium on Thursday to kick off its final journey to the 2018 Russia World Cup. Spotted at the Seoul World Cup Stadium during a training session on Monday was Ji Dong-won, the Korean winger for the Bundesliga’s FC Augsburg. While Ji is a midfielder on the flank, there’s a vacancy in the team’s striker position as Suk Hyun-jun of Trabzonspor has been dropped from the roster due to complications with his Turkish club. Now, Ji aims to fill that void and take up the responsibility as a scorer for Uli Stielike’s senior team.

Suk, who has shown prowess as a lone striker during the Rio Olympics, was taken off the roster when the team’s upcoming match against Syria during the qualifiers was moved from Lebanon to Macau. Suk was only supposed to play in the game against Syria in Lebanon. He had just joined a new club, Trabzonspor of Turkey, on loan from FC Porto and Stielike thought the striker needed some time to adjust to his new team. Although the trip from Turkey to Lebanon wasn’t far, Macau and Hong Kong would be too far for Suk to visit and go back in a short amount of time. Hence, Stielike made the decision to relieve Suk from the national team for the time being.

But now with Suk out of the picture, the German-born skipper of the Korean national football team needs more options. While there is Hwang Hee-chan, it is highly unlikely that the young forward will be placed as the lone striker of the team once the match begins. Still, Stielike always had someone at the top to fight for ball and rattle opposing defenders. Unless Stielike decides to change his formation drastically and leave the position vacant, he needs a talent to replace Suk. This is where Ji comes in.

Although Ji was grouped as a midfielder in the roster unveiled last week, he has ample experience as a lone striker, filling the role for Stielike as late as last March in a friendly against New Zealand. 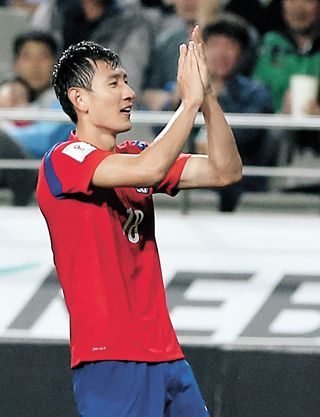 Ji Dong-won of Korea celebrates after scoring a goal against Jamaica in a friendly match in Oct. 2015. [YANG GWANG-SAM]

He was also a candidate for the position during the friendly against Jamaica in October 2015. Then, he vied for the position with Suk and Hwang Ui-jo of Seongnam FC, and while he ended up playing left flank, he did more than his share on the team’s offense, scoring the opening goal for Korea. This was his first goal at the international level in four years.

With a surplus of offensive midfielders, Stielike will want to utilize Ji and his experience. Along with Son, Ji has played in many international stages such as the World Cup in 2014 and AFC Asian Cup in 2011.

He’s also one of the few Korean footballers who is a regular at the European stage. After leaving the K-League in 2011, he played in Europe for five years.

But on the flip side of the coin, Ji hasn’t had much playing time in recent months. Although he played in 21 season matches last season, he started only in seven of them. And a lack of playing time directly translates into less facility on the field and usually fewer goals as a result, and indeed, scoring opportunities have eluded Ji, who failed to net any last season. Even now, while the team is in the middle of its preseason, Ji is not a regular for Augsburg. Unsurprisingly, critics are skeptical as to whether he has the stamina needed to endure the physical duress that a lone striker must be able to handle.

Even with the national team, Ji has not had much success recently. He played in three games since the match against Jamaica last year, including the two friendly matches in Europe in June. Although he played full time in those games, he was unable to tally any goals.

Still, with Stielike not picking anyone to replace Suk, Ji seems to be one of the only plausible candidates to fill those shoes.