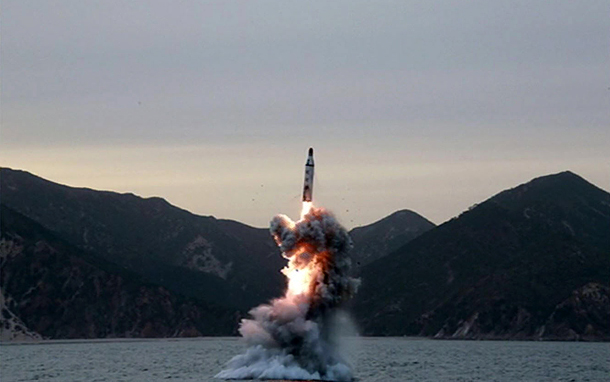 The first step to solve a problem is to accept it as a problem. Nothing can be solved if the problem isn’t considered as one. The strategy of trying to resolve the North Korean nuclear problem through sanctions has failed. Like it or not, this fact cannot be denied. The defeat must be accepted to find a new path. Otherwise, the goal of resolving the North Korean nuclear problem will slip farther away.

The sanctions-led policy on North Korea was pronounced invalid when the submarine-launched ballistic missile (SLBM) flew as far as 500 kilometers (311 miles) to the East Sea last week before falling into waters of Japan. North Korea has perfected technological complexities to ready SLBM for actual use in just 19 months. The North Korean nuclear threat has entered an entirely new stage through the breakthrough in its SLBM technology. The North debunked international skepticism and sanctions to sophisticate its nuclear and missile capabilities.

The United Nations Security Council has been trying to force North Korea to give up nuclear ambition by slapping sanctions on top of sanctions every time the recalcitrant regime tested nuclear devices. It has issued four resolutions from 1718 against the first nuclear test in 2006 to 2270 against the fourth test in January this year. The Resolution 2270 was the toughest non-military sanctions against an individual state in U.N. history.

Pyongyang, however, was not to be humbled. In fact, sanctions made it more brazen. It blasted off short and mid-range missiles successively and made headway with SLBM. Resolution 2270, which was designed to cut off cargoes, equipment, and funds that could be used for weapons development, has clearly not been effective.

Experts point out that the effect of the latest resolution had been overstated. Cho Dong-ho, a professor at Ewha Womans University said the resolution was toughened compared to earlier ones, but nevertheless cannot be deemed that tough. The resolution bans shipment of coal, iron, and other key earth minerals, but certain trade revenue intended for “people’s livelihoods” is still allowed. Travel sanctions on listed institutions and individuals and a freeze in overseas assets have also been proven ineffective. Additionally, other revenue sources from overseas such as dispatch of labor have been excluded.

The latest sanctions were the best possible package under the Security Council where Russia and China are seated. But whether they have been faithfully abided remains questionable. The reports on the sanctions commitment were due three months ago, but only 47 out of 193 U.N. members have so far handed in theirs. Although Security Council resolutions are binding, the U.N. does not have the authority to enforce the actions. On top of the loopholes, compliance in the sanctions remains questionable.

What is clear is that sanctions are not working. We must accept the fundamental limitation in sanctions-led policy and seek out new methods. We also must shake out of the blind wishful thinking that the Pyongyang regime will one day crumble. To present the defection of a number of elites as a sign of fissures in the regime is hyperbole and dangerously naïve.

Sanctions can reap fruit when they are accompanied by dialogue. Cuba, Iran and Myanmar all have been under sanctions for a lengthy period, but they did not yield because their regimes collapsed. They were persuaded to open and change through dialogue. No states have been won over through sanctions. Sanctions should be the means, not the goal.

But few can speak of the alternative now because President Park Geun-hye remains resolute on the issue. Anyone who suggests dialogue could be understood as taking a jab at her North Korea policy. Only the president can pave the way for dialogue. It won’t be pleasant to admit to a policy flop, but there is no other way. North Korea’s Kim Jong-un does not have a term on his rule. Time is on his side. The president has a year and a half left.