Why not a four-day workweek?

Why not a four-day workweek? 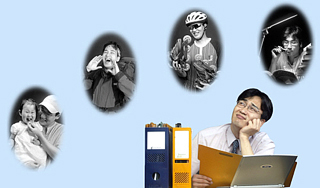 It may be hard to believe, but when the five-day workweek was introduced in 2004, many people had a hard time deciding what to do with the extra day off. We had worked six days a week all our lives and barely had a day to rest. We didn’t have hobbies and didn’t know how to have fun. We couldn’t handle the two-day weekend.

When thrift and diligence were the highest virtues, the government’s initiative of the five-day workweek was met with fierce opposition.

Five economic organizations issued a threatening statement that the economy would suffer. Students complained that they would suffer at supplementary academies all day Saturday.

But all these worries turned out to be unnecessary. The economic growth rate rose from 2.9 percent in 2003 to between 3.9 and 5.5 percent for the next four years. There was no harm, and students didn’t want to go back to six school days a week.

A dozen years have passed since the five-day workweek was introduced. Now that robots and AI replace human workers, there are talks of a four-day workweek. The discussion is rather late for an OECD-member country. The average workweek in Norway, Denmark and the Netherlands in 2014 was between 28.9 and 33.9 hours. They’ve been working four days a week for some time now.

Some even argue that four days are too much. Mexico’s telecom tycoon Carlos Slim, who was the world’s wealthiest man from 2010 to 2013, underscored the need for a world-wide introduction of the three-day workweek. He argued that people live longer and retire later, so working three days a week is more reasonable. He claimed it would allow people to work longer and prepare for retirement.

Many experts emphasize the merits of three or four work days a week. The quality of life would improve, and employment would increase. More importantly, creativity is triggered when people get rest and enjoy leisure. Research has proved the correlation, and we need to remember this as a creative economy becomes important.

More companies are switching to four-day workweeks. On Aug. 27, American e-commerce company Amazon announced that it will introduce a 30-hour workweek. As a means of job sharing, Korea’s Hanwha Chemical started a four-day workweek on Aug. 25. Ace Group and Gimm-Young Publishers Inc. already have four-day workweeks. These companies understand that leisure and rest makes the brain more productive and creative. Carl Jung said, “Creation of something new is not accomplished by the intellect but by the play instinct acting from inner necessity.”