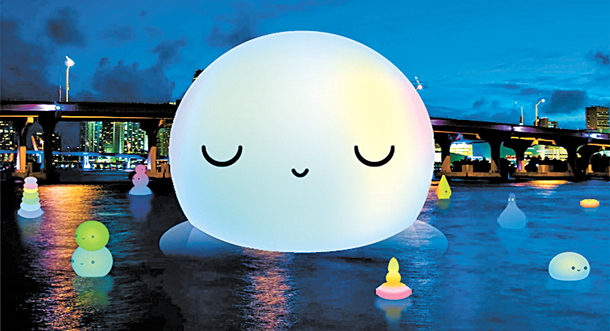 A computer-generated image of a full-moon art installation that will float above Seokchon Lake in Jamsil-dong, southeastern Seoul, for a month starting Thursday. [LOTTE WORLD TOWER]

For one month starting Thursday, a full moon will overlook the eastern part of Seokchon Lake every night in Jamsil-dong, southeastern Seoul, as part of a public art project organized by the Lotte World Tower and the Songpa District Office.

This is the third public art project overseen by Lotte Group affiliates, after a giant rubber duck designed by Dutch artist Florentijn Hofman graced the lake in 2014 and over 1,600 panda sculptures were installed at Dongdaemun Design Plaza in central Seoul last year.

For this project, titled the “Super Moon Project,” a 20-meter (65-foot) translucent full moon made of vinyl will rise above Seokchon Lake after the sun goes down at 6 p.m. and will light up in seven shades of color until 10 p.m. Eight luminous objects will surround the smiling moon.

The installation is designed by California-based art collective FriendsWithYou.

Whereas Seoul was one of the last stops for Hofman’s Rubber Duck project in 2014, the Super Moon Project is making its world debut tomorrow in the Korean capital.

The installation will run through Oct. 3, after which it will then move on to the United States before making several more stops around the world.

“The project was first conceived by FriendsWithYou as an installation only intended for the Korean public,” Lotte Shopping said in a press release.

“Artists visualized the full moon as the closest friend of Earth and structured the artwork under the premise that we are inviting the moon to Seokchon Lake from space.”

The luxury department store will also sell a limited number of moon-shaped lamps, in which part of the profits will be donated to the Make-A-Wish Foundation for children suffering from incurable diseases.