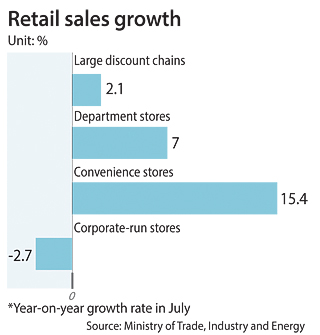 Most sectors of the local retail industry saw sales grow in July compared to the previous year, largely due to more holidays and improved consumer sentiment.

Sales for the retail sector grew 10.8 percent year-on-year, the most in three months, the Ministry of Trade, Industry and Energy said on Tuesday.

At brick-and-mortar stores, sales rose 6.4 percent over the previous year and jumped 20.3 percent for online stores during the same period.

“Sales rose significantly compared to the previous year due to the base effect from last year when Middle East Respiratory Syndrome hit the country, raised consumer sentiment and more number of holidays in general,” said Chung Jong-young, a director at the Trade Ministry.

The composite consumer sentiment index fell to 99 in May and remained unchanged in June. However, it rose to 101 in July, according to the Bank of Korea. A reading above 100 points indicates the majority of survey participants have a positive outlook on the economy, while a reading below 100 indicates a negative view.

“Furthermore, there were two more non-working days in July compared to the previous year and the government’s decision to give 10 percent money back to consumers who purchase energy-efficient home appliances also boosted sales,” said Chung.

Sales at large discount stores rose 2.1 percent year-on-year, driven by sales of home appliances, and the Trade Ministry said sales rose due to the abnormally hot weather this year.

Department stores saw sales rise 7 percent. There were 7.2 percent more customers as stores launched sales in July, according to the Trade Ministry.

Sales at department stores such as Lotte and Shinsegae grew 7 percent.

Data was compiled from sales at E-Mart, Lotte and Hyundai, along with several supermarkets, including Homeplus and GS.