‘Senior officials must try to find some middle ground’

‘Senior officials must try to find some middle ground’ 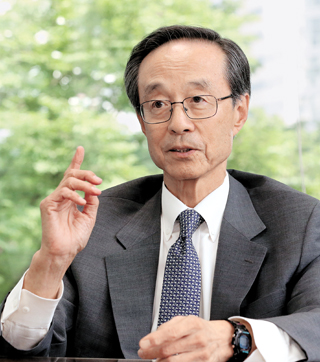 China has been showing its discomfort with Korea’s decision to deploy the Terminal High Altitude Area Defense (Thaad) system here in Korea. Chinese Foreign Minister Wang Yi publicly showed concern and China’s state-run People’s Daily even went so far as to say, “South Korea will inevitably be the first target.”

North Korea launched another missile on Aug. 3 and the JoongAng Ilbo met with South Korea’s former foreign minister Han Seung-joo on that day.

He has served as a minister from Feb. 1993 to Dec. 1994, which was when the United States and North Korea signed the Agreed Framework in Geneva.


Q. The repercussions from the Thaad deployment issue are getting stronger.

A. As far as I know, the Thaad system is to supplement Patriot missiles. North Korea is developing nuclear weapons and has been threatening us with their Scud and Musudan missiles, and I believe Korea needs to develop a multilateral missile defense system.

It is necessary to persuade those who oppose the deployment but I don’t think it necessarily means we need to reconsider deployment. Defending ourselves from North Korea’s missiles and nuclear weapons is essential for the country’s security.

What are your thoughts on China trying to shake current status quo?

It might be natural for China to rebalance the current status quo as they were oppressed during the early 20th century, persecuted by Japan and the West.

Until the 1980s, Deng Xiaoping called for “biding your time and hiding your strength,” but they have changed since the 1990s and have started to show off their power and military capacity and care more about recovering their lost lands and dignity.

China doesn’t have a hegemony over the world but they do have it in Asia, at least. I think China’s policy is not to allow the United States to have that hegemony around the world.

It is not good for China to cause trouble in East Asia over the Thaad issue or by allowing North Korea to have nuclear weapons, since the country has to focus on ongoing South China Sea disputes.

I believe that China should suppress their emotions in some way. Korea has reasons and obligations to [deploy the Thaad].
I don’t see the reason for Korea not to deploy the system just because China is opposing it. By continuing to launch missiles, North Korea is only strengthening our obligation to deploy it.

The relationship between Seoul and Pyongyang appears to be stuck.

It is all because of North Korea’s obsession with missiles and nuclear weapons. As far as I understand, the Korean government’s precondition for talks is not that North Korea must give up its nuclear weapon at first. Rather, Seoul wants them to at least show it is willing to do so in order to talk.

Is there anything the Korean government needs to do?

The government needs to talk to, or have a relationship with, North Korea, while also not allowing the North to have nuclear weapons. It means that Korea needs to keep the fundamental goal of denuclearizing North Korea, while finding a formula for compromise.

Currently, the Korean government wants the North to show its will to give up nuclear weapons and I believe the government shouldn’t approach the matter as an all-or-nothing situation.

I also believe the Koreas need to continuously cooperate with each other and have talks with the United States and China.

Prime Minister Hwang Kyo-an met with Xi Jinping a week before the government announced its decision to deploy the Thaad system. China didn’t seem to have any idea about Korea’s decision to do so. Do you think China felt insulted?

I don’t know much about it, but I do think that Hwang made a fault for not telling him if he knew it in advance, since their meeting was similar to a summit meeting.

What do you think is the most important thing that the government needs to resolve?

One has to see things with a long-term perspective. There is an election coming up in the United States later this year. The Thaad deployment doesn’t, in fact, cause that significant a threat to China and we need to understand why China is uncomfortable with it.

Are they worried about South Korea, the United States and Japan’s so-called trilateral alliance? Are they uncomfortable with the deployment of the missile defense system? Or do they have other reasons to oppose it?

For example, there might be strong opposition from the Chinese military that Xi can’t ignore.

In two to three years from now, the new administration needs to consider how to have relationship with the United States and China.

Instead of having a brief conversation during the ordinary summit meeting, the government needs to focus on having prior consultations with working-level officials before the actual talk.

For example, think for a moment about Kissinger visiting China to have talks with Mao Zedong and Zhou Enlai.

In my opinion, it is very helpful for senior officials who actually have the ability to try to find some middle ground.