A group of thought leaders participating in the Peace Odyssey engage in a discussion overlooking a vast farm run by Hyundai Heavy Industries that cultivates corn, beans and oats in Ussuriysk in Russia’s Far East on Aug. 11. Since 2009, Hyundai Heavy Industries ran the 67 million-hectare farm, which is 23 times the size of Yeouido, in western Seoul, and has been selling crops to Russia and China. [KWON HYUK-JAE]

A group of four dozen Korean thought leaders who took part in the Peace Odyssey 2016 in a pilgrimage across Russia’s Far East pledged at the Amur River to strive toward a “confluence of peace,” to become one with neighboring countries.

At the Amur River, where waters from China, Mongolia and Russia converge, these intellects dwelled on the importance of harmony and cooperation with neighboring countries to enable the peaceful unification of the Korean Peninsula.

“I was filled with mixed feelings as I overlooked the Amur River from Khabarovsk,” said Lee Seung-cheol, vice chairman of the Federation of Korean Industries (FKI). “The water is as wide as the ocean as it is the point of convergence with the Ussuri River. Seeing this grandeur, I naturally thought that rather than unification by absorption - which would inevitably lead to conflict - we need to head toward a peaceful unification by confluence.”

His words were met by applause from the odyssey group, as the bipartisan thought leaders agreed that this was the moment to head toward a unification of the Korean Peninsula by confluence, the moment that the “Amur resolution” was agreed upon.

Participants pointed out that a senior official of the conservative Federation of the Korean Industries decrying the feasibility of unification by absorption made it especially significant.

This group of 47 business, political, academic, legal, media, cultural and literary leaders made a six-day “Peace Odyssey” trip across Russia’s Far East, bordering North Korea and China, from Aug. 8 to 13.

It is a follow-up to the inaugural odyssey in June 2015, a pilgrimage across China’s border with North Korea, from the Yalu to the Tumen River, to mark the 70th anniversary of the division of the Korean Peninsula.

The six-day journey took the group from Vladivostok Station, the starting point of the 9,289-kilometer (5,772-mile) long Moscow-bound Trans-Siberian Railway, to Zarubino port, a region that experts envisioned can become the second Kaesong Industrial Complex.

They then headed to Ussuriysk to pay respect to Korean independence activists who fought during Japanese colonial rule (1910-45), stopping by a cultural center for Koryoin, or ethnic Koreans in Russia. Russia’s Maritime Province had served as a base for these activists, and the odyssey paid respect to the 59 patriots and laid flowers at a memorial stone for independence activist Lee Sang-seol (1870-1917), who is also called the “father of modern mathematics education in Korea.” Though they did not get the permit to visit Khasan, bordering North Korea, the group glimpsed it from Kraskino in Khasansky District, and ended the trip in Khabarovsk, at the confluence of the Amur and Ussuri rivers.

After days of debate and reflection, the intellects concluded that Russia can be the lever for such “confluence of peace.” While Russia’s relations with Seoul are less defined than those with Beijing or Tokyo, Moscow is eager to see Korea’s participation in the development of its Far East region, providing Seoul a route to Eurasia. And such cooperation with Russia can also be an impetus for peaceful relations with North Korea. 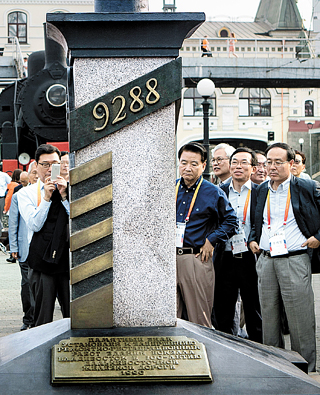 The Peace Odyssey 2016 stand on the platform of Vladivostok Station, where the Moscow-bound Trans-Siberian Railway departs, as they mark the start of their six-day pilgrimage across Russia’s Far East, which kicked off on Aug. 8. The 9288 Monument signifies the approximate distance of the railway in kilometers, which Korea envisions being connected to some day. [KWON HYUK-JAE]

Furthermore, Seoul’s cooperation with Russia can also be a step toward opening up a new Arctic shipping route.

“It was awkward when I first met with novelist Hwang Seok-yeong,” recalled FKI Vice Chairman Lee, describing the acclaimed Korean writer as their six-day journey came to a wrap. “But through talking and drinking throughout the odyssey trip, now we are full of laughter. He is very endearing.”

Other conservative figures likewise grew chummy with the award-winning Hwang, who once made an illegal trip to Pyongyang in 1989, and spent years afterward abroad, living in New York and Germany.

Chung Eui-hwa, a former speaker of the National Assembly, and Chung Duck-koo, a former commerce minister, along with Hwang and novelist Lee Mun-yeol headed on Aug. 11 to coffee shops and bars to hold eight hours of discussions.

“After conversing with Hwang, I learned we shared similar thoughts on many areas,” former Commerce Minister Chung said. “When I said that the country is in an overall crisis, whether it be domestic or foreign affairs, Hwang told me, ‘I fundamentally agree. I like you.’”

And Chung proposed to be friends, which Hwang agreed to. “As we held deep conversation, we learned that conservatives and liberals have similar view points,” said the former minister. “The odyssey’s value lies in this.”

Lee was inspired by his conversation with the two Chungs on the 1997 financial crisis and is planning to write a novel on this soon.

“I learned here for the first time that Hwang was close friends with my late older brother, who was 10 years my senior, the architect Kim Seok-chul,” said Kim. “And as we talked, I realized that our thoughts on the path our people have to walk are the same. Progressives have a tendency to emphasize Korea’s history of democratization, and neglect industrialization, but Hwang was different. He said there is no country that has made such an economic miracle. On the spot, I said, ‘I will regard you as my brother in the stead of my brother who has passed away.’” And Hwang accepted him as his “younger brother.”

The odyssey traveled for many hours by bus from Vladivostok to Ussuriysk, Amur River and Khabarovsk, and the flow of discussion never stopped.

The debate culminated at their second seminar in Khabarovsk, on Aug. 13, their final day.

While the participants had various opinions on the ongoing stringent sanctions on Pyongyang for its fourth nuclear test and subsequent long-range missile test at the beginning of the year, they were united on the viewpoint that sanctions can coexist with dialogue.

As can be seen in Washington’s relations with Iran, while the international community has cooperated and pushed for sanctions on North Korea, the door to dialogue has to remain open, according to conservative and liberal participants alike.

Likewise, such confluence with neighboring countries, they said, was the remaining task.

“All the participants passed the mike non-stop till the point of destination, which could take up to four hours,” recalled Cho Yoon-je, economics professor at Sogang University. “We called it a ‘school bus.’” Many Russia experts on the trip, including Shin Beom-shik, a professor at Seoul National University, lent their expertise.

“I only knew of Russia superficially, so this was the best place to learn about the country properly,” said minor opposition People’s Party Rep. Oh Se-jung, a former physics professor at Seoul National University.

Business was heavily discussed, as well, and Shinjung Global Company CEO Yoo Jin-tae said, “Through former Financial Services Commission Chairman Kim Seok-dong’s lecture on the bus, I learned the importance of Russia, and he said to me he will propose a financial idea for a Russian road construction contract soon.”

Jaung Hoon, political science professor at Chung-Ang University, said, “Taking into consideration JoongAng Ilbo and JTBC Chairman Hong Seok-hyun’s suggestion that a bipartisan principle needs to be agreed upon on policy toward North Korea, the debate was marked by an encompassing spirit of compromise.”

“At first, when I saw the participants, I thought this person would say this, and that person would say that,” said Kim Jin-Tae, a former prosecutor general. “But when we actually spoke on the topic of unification, we were generally unified in position. I felt in person that there was no big difference in ideologies on the issues of inter-Korean relations or advancing toward Eurasia.”

He continued, “The Maritime Province is a very important place for the history of our independence activists, but because of their affiliation with socialism, we have been negligent in honoring their existence. Transcending ideology and shedding more light on those independence fighters who were active in the Maritime Province through the Peace Odyssey is very significant.”

Ahn Byung-min, a senior researcher on Eurasia with the Korea Transport Institute, said, “It felt like the vague wall I believed to be between conservatives and liberals had completely shattered. That is because we shared the same vision that when the North and South become one, we need to build a continental nation with Eurasia and the Pacific.”

Saenuri Party Rep. Na Kyung-won said, “When I was the chair of the Foreign Affairs and Unification Committee in the previous National Assembly, I met with the foreign affairs committee chair of the Russian parliament, who expressed ruefulness that Korea was so skewed toward the United States. While firmly upholding the Korea-U.S. alliance, we need to also create independent space for Russia.”

But Lee Kyu-hyung, former ambassador to Russia, pointed out, “Russia’s sense of fatigue is not just our fault but is a two-way street.”

For some, like Rep. Roh Hoe-chan, floor leader of the minor opposition Justice Party, the journey across Russia’s Maritime Province was a time to dwell on Korea’s lost half.

“Coming to Russia’s Maritime Province in the 1990s, I recall being captivated as I stood by the banks of the Tumen River, where it was just four-meters wide, looking over at North Korean land,” said Roh. “We need to increase our role in Russia’s Far East, which is linked with the Tumen River and North Korea.”

“Our society is so caught up in camp logic, there is no channel for conservatives and liberals to communicate with each other,” said Shin Gak-soo, a former ambassador to Japan. “However, through the odyssey, experts on both sides held an all-inclusive, unreserved discussion. That in itself contributes to the progress of Korean thinkers.”