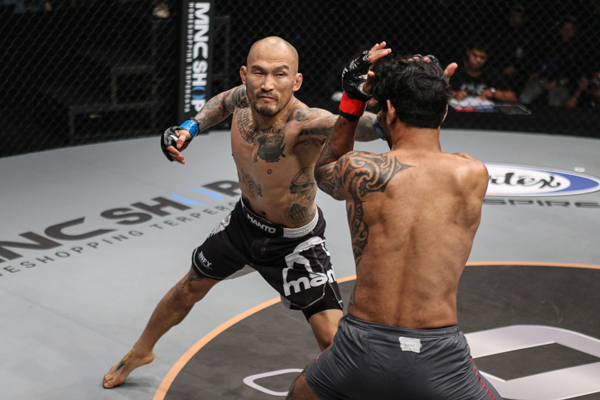 Park Kwang-cheol, left, also known as Kotetsu “No Face” Boku, is a Korean mixed martial artist and a kickboxer who competes in the lightweight division at One. [ONE CHAMPIONSHIP]

When the Ultimate Fighting Championship (UFC), a U.S.-based mixed martial arts (MMA) promotion, made its debut here in Korea in November 2015, many witnessed the tremendous potential that the MMA events hold in the country, as the first UFC event, the UFC Fight Night Seoul, turned out to be a knockout hit.

As the birthplace of one of the most highly distinguished martial arts of the day, taekwondo, it seemed almost inevitable Koreans would exhibit an inherent love for combat sports. Now, ONE Championship (ONE), Asia’s largest sports media property, which is based in Singapore, has set its sights on Korea as the next stage to carry out its rapid expansion. Korea, with an ever-rising interest in MMA, looks more than ready to reciprocate ONE’s interest and welcome Asia’s top promotion.

“ONE aims to showcase the true beauty of martial arts by creating authentic Asian superheroes through the world’s most exciting MMA events,” said Victor Cui, the CEO of ONE. “Koreans know the sport [MMA] well, and we want to bring our brand of world-class MMA to the fans in Korea, too.”

As Cui mentioned, ONE was created to promote the greatness of Asian martial arts. Cui said the motivation that compelled him, otherwise a successful business man and sports marketer who seemed to have no need to take a risk by joining the project to start a promotion from scratch, nevertheless didn’t hesitate to jump in with both feet.

“I took it immediately,” Cui said. “Asia itself poses a great opportunity for the growth of MMA, as it is the birthplace of various martial arts disciplines. With my experience in the industry, I had the opportunity to observe various organizations’ operations and strategies, their keys to success and the reasons for their failures, which I know I could use to shape a lot of my business decisions today for ONE. Our strategy was to take the best practices from the West and the East and create a new, distinctly Asian approach.”

Essentially, according to the business dynamics of ONE, Cui said, the Singapore-based promotion attempts to combine what’s best from others in the industry with the indigenous nature of Asian martial arts to create a whole new dynamic that locals can root for.

Thus far, ONE has been met with open arms as it has, over the past 5 years, expanded to many different cities across Asia such as Manila, Kuala Lumpur, Jakarta, Bangkok and Taiwan.

“This shows that in almost every city, there is a demand for MMA,” said Cui. “We get local sports government support wherever we go - when we are in Myanmar, the Lethwei organisation supports us; when we are in Cambodia, the Khmer boxing organisation supports us.” Some say that ONE’s rapid expansion can be attributed to its intention to emphasize what is local, while others, who live in areas where ONE is still yet to arrive, say that they would welcome such an initiative.

“I am not familiar with ONE as much as I am with the UFC, but still, I like the idea of watching the MMA promotion that originated here in Asia,” said an MMA fan in Korea. “I think ONE has a great cause here in that it aims to nurture local heroes and help them shine on an international stage. I think this definitely differentiates ONE from other promotions. It is also much bigger, I feel like, than Road FC [Korea’s own promotion], which means Korean fighters could really up their reputation on the global stage if they join ONE.”

ONE may be little known to Korean fans, but it has purchase with Korean fighters. Its inaugural event, which took place in September 2011 in Singapore, was a bout between Eduard Folayang, a Filipino mixed martial artist, and Korea’s Kwon A-sol.

At the moment, Park Kwang-cheol is one of the Korean fighters vying for a ONE title. Park, also known as Kotetsu “No Face” Boku, is a Korean mixed martial artist and kick-boxer, competing in the lightweight division. He used to hold the title in the division before he conceded it to Shinya Aoki, the current title holder.

“The thing is, to have success in Korea, ONE would have to stir up this sort of loyalty or patriotism by showing that Korean fighters are given more chance in the cage,” said an industry insider. “They really need to demonstrate and advertise in order to show they’re ready to make the necessary investment to rear and develop local athletes. I would say that is the key if ONE is to make a name for itself in Korea where, still today, the UFC is the most well-known and most watched MMA promotion. This is because Korean UFC fighters such as Choi Doo-ho, Jung Chan-sung and Kim Dong-hyun are receiving a lot of attention by the U.S. promotion.”