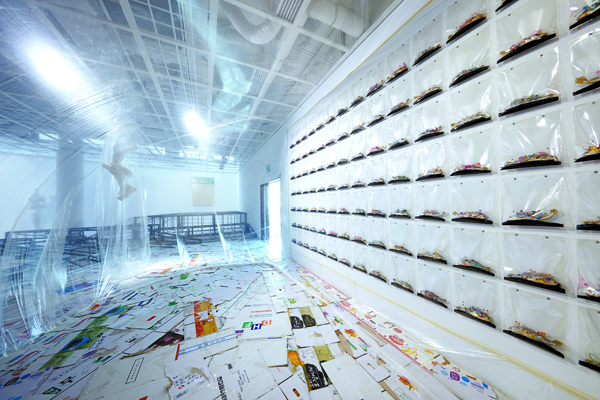 Lee Bul’s “Majestic Splendor”, famous for letting raw fish covered with flashy ornaments decay, is part of the “Connect 1: Still Acts” show at the Art Sonje Center held to celebrate its re-opening after being closed for 9 months for renovations. [ARTSONJE CENTER, MOON SO-YOUNG]

With three major art biennial events - the 9th Media City Seoul, the 11th Gwangju Biennale and the 8th Busan Biennale, kicking off this week, many foreign curators, art dealers and collectors are expected to visit Korea. To attract them, museums and commercial galleries have started opening new exhibitions recently.


The Korea JoongAng Daily has picked exhibitions at two museums in central Seoul - Art Sonje Center and the National Museum of Modern and Contemporary Art (MMCA) Seoul, in the art zone east of Gyeongbok Palace - as the ones to visit this season. 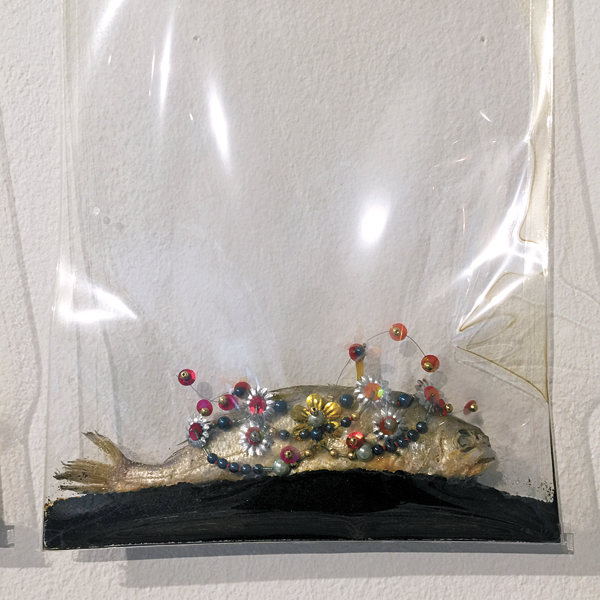 
A corner of the third floor of the museum, which re-opened on Friday after a nine-month renovation, is filled with raw fish, each one covered with flashy oriental ornaments. The ornaments sparkle but give off a smell familiar to anyone who has ever visited a fish market. The fish are Korean artist Lee Bul’s “Majestic Splendor,” a notorious work which has returned for the first time in nearly two decades.


The fish are supposed to decay in this white cube, with their forms dismantling, their smell getting worse and stronger but their ornaments still sparkling. It can bee seen as a kind of modern re-creation of “Vanitas,” which were the 17th-century European still-life paintings that symbolized the emptiness of earthly life. The artwork also has layers of other meanings - including ridiculing of the stereotype of ancient East Asian women who cover themselves in oriental ornaments, according to critics.


The work was exhibited at the Museum of Modern Art in New York in 1997, but was removed shortly after the show opened, due to the terrible stench. “‘Majestic Splendor’ can be seen as a case that both corrupted the sanctity of modernist purity, as well as opened up another approach of art history,” said curator Najung Kim.


In this vain, Lee’s works in the 1990s represented Korean post-modern art and was the inaugural exhibition at Art Sonje Center in 1998, which has focused on post-modern and conceptual art since its opening. To celebrate the re-opening, the museum started the “Connect 1: Still Acts” show, which consists of solo shows by three female conceptual artists - Lee, Chung Seoyoung and Sora Kim.

“The shows are re-productions of those they had in this museum between 1998 and 2004,” explained Sunjung Kim, head of the museum and a famous curator. “All the three artists have invented their own aesthetic languages to articulate the contemporaneity of each time period. Now, we re-contextualize their works in the changed conditions for new discussions.”

The annual exhibition featuring the four artists nominated for the “Korea Artist Prize” granted by the museum and the SBS Foundation kicked off on Wednesday. The finalists are Kim Eull, Back Seung Woo, Ham Kyungah, and the team of mixrice (Cho Ji Eun and Yang Chul Mo).


Among them, Ham, who wowed international art lovers with her collaboration project with North Korean embroiders and study of politics’ influence on art and imperfect communications through the project in recent years, presents more works related to North Korean defectors. Among them, an installation work that looks like a gigantic Abstract Expressionist painting has been created from the artist’s collaboration with a boy who is a North Korean defector. The boy, now playing on a youth football team, kicked balls covered with colors that the artist prepared so that the traces of the balls are made like brush strokes of diverse colors.


As for Kim Eull, he has constructed a life-size two-story building - a replica of the artist’s studio - that the visitors can enter and explore. The viewers will find drawings in the building and, also from the building’s window and small terrace, they will see thousands of drawings hanging on the black wall of the museum. The artist said in a press preview on Tuesday that the drawings are the artist’s “attitude toward the world.”

Back explores new aspects of photography which the artist thinks is no longer records of facts but just pictures or images. The team known as mixrice deals with the issue of migration, in particular the reality that migrant workers in the Korean society.


Besides the exhibitions, Arario Museum in Space, has added new works including a text installation by the famous artist Liam Gillick to its permanent exhibition.

The museum is famous for the iconic ivy-covered brick building “Space” designed by the legendary Korean architect Kim Swoo-geun (1931-86) and the clever installation of art works in Space’s intricately linked display areas and spiral staircases remain in their original state.