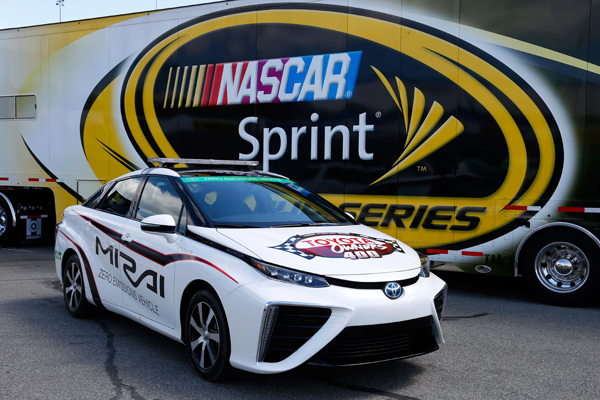 Toyota Mirai, a hydrogen fuel cell vehicle, was unveiled as the pace car for the NASCAR Sprint Cup Series auto race in 2015.[AP/NEWSIS]

Volkswagen’s emissions scandal, which has stirred the global auto industry since last year, has one clear lesson. Clean diesel and other internal combustion engine-powered vehicles cannot be environmentally friendly. Countries are competing to develop vehicles that do not emit fine dust and harmful gas. Vehicles that respond to climate change and global warming will be the future of the industry. While the development of convergence technologies like self-driven, connected cars and smart cars draw attention, the essence is environmentally friendly vehicles.

Environmentally friendly cars generally refer to hybrid, electric and hydrogen-fueled cell vehicles. Hybrid cars use engines at a high speed and electric motors at slower speeds. In the last 20 years, hybrid car use has expanded worldwide, but they are limited as pollution-free vehicles. Electric cars run on motors using the electricity charged on batteries. When on the road, the vehicles are completely pollution-free, but the process of charging electric energy still indirectly emits pollutants and greenhouse gas. It is still expensive, takes a long time to charge and the driving mileage is low. The charging infrastructure also needs to be expanded.

Hydrogen fuel-cell vehicles run by making electric energy using hydrogen and oxygen abundant on the face of earth. When on the road, it emits only pure water, and the completely pollution-free vehicle is expected to be the ultimate future in autos. In 2013, the world’s first commercial model was developed in Korea, and recently, Japan succeeded in mass production. However, it is far more expensive than electric vehicles, and there is little infrastructure for producing, moving, storing and charging hydrogen. It will take time to catch on.

Therefore, hybrid and electric vehicles are to lead the environmentally friendly automobile industry for a while. Countries around the world want to make their models the global standard. Japan is the leader in hybrid cars. Since the first hybrid was introduced in 1997, Japanese carmakers continue to develop high-efficiency environmentally friendly models. They are working to maintain their dominance by introducing micromobility, which is in-between a motorcycle and a car. The United States is focusing on electric cars with self-drive features as Tesla and the Big 3 carmakers present commercial models. The government is providing various incentives and infrastructure such as charging stations to expand the market. The U.S. government and companies are leading automobile and IT convergence.

After the Volkswagen crisis, Europe is swiftly switching from diesel-fueled cars to environmentally friendly alternatives. Germany has already displayed hybrid and mass-produced electric cars. Norway will ban sales of all internal combustion engine vehicles by 2025 and switch to electric cars. China declared seven years ago that electric cars will be the vehicles of the future, boosting government-level assistance. Last year, of the 530,000 electric cars sold worldwide, 220,000 were sold in China. Its policies are a few years ahead of Korea and it also has technological superiority.

The situation is not easy for Korea, which exports three out of four manufactured cars. Korean carmakers need to catch up with global trends and standards in technology and infrastructure. But it won’t be easy. At the end of 2015, there were just 4,300 electric cars in Korea and only 340 public fast-charging stations. It isn’t comparable to Japan’s 6,000 fast-charging stations and 16,000 public charging stations.
There are a few things to keep in mind. First, we need a Korean model. Seventy percent of residents live in multiunit housing and roads are narrow in Korea. So the electric car charging infrastructure needs a solution. More mobile charging stations are needed, and we may want to consider charging outlets in public parking lots or on street poles.

Secondly, owners of environmentally friendly cars should be given stronger incentives. Increased subsidies and other motivations such as allowing electric cars in bus lanes should be reviewed.

Thirdly, the government’s command center should be re-established. As the fake efficiency controversy shows, auto-related affairs are divided across three ministries, and ministries act selfishly rather than cooperating. It is only natural and necessary to collaborate to promote environmentally friendly cars.

*The author is a professor of automotive engineering at Daelim University College.
Kim Pil-soo