A running joke about the Korean market goes that there are only two types of stocks: Samsung Electronics and the rest. 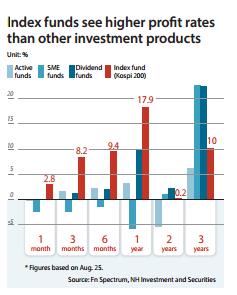 But it’s no laughing matter when one considers how funds that heavily invest in the world’s leading smartphone maker are thriving while others are not doing nearly as well.

Index funds, on the other hand, have been enjoying healthy returns, outperforming not just active funds but also other types of funds such as SME and dividend funds.

According to a recent report by NH Investment and Securities, in the year leading up to Aug. 25, the profit rate of index funds was 14.8 percentage points higher than that of active funds. Especially when compared to SME funds, that difference further expanded to 23.7 percentage points.

Meritz Korea Fund, one of the country’s leading active funds, reported a 21 percent loss on its investment this year. Last year, it had enjoyed a profit rate exceeding 20 percent, thanks to an increase in share values of small and midsize companies in which the fund had invested.

Today, index funds are thriving not only in Korea but also in other markets, including on Wall Street. A Business Insider article from Aug. 19 cited a recent report by consulting firm Deloitte that said 72 percent of investments went into “passive funds,” another term for index funds, last year.

Although they are trending worldwide, index funds are still relatively new for many Korean retail investors. When the market for funds started picking up in the mid-2000s, most people were investing in active funds. Financial institutions, including banks, did little promotion of index funds because the sales commission was relatively small.

However, the tides have been changing in favor of the index fund.

“As the limits of conventional active funds have been exposed, retail investors should start taking interest in index funds,” said Hong Yoong-ki, in charge of multi-asset solutions at KB Asset Management.

However, even if different funds invest in the same index, the profit rates of each can still be different. In fact, when comparing the fund with the highest rate of profit to that with the lowest, the difference has been as much as 13 percentage points.

“Although the commission charge is relatively smaller than that of active funds, the fund manager, in trying to increase the commission, uses a little bit of strategy when buying and selling stocks, which can make a difference in profit rate,” said Yoo Dong-wan, an analyst at NH Investment and Securities.

For those who prefer an investment with fewer fluctuations in profit rates, the analyst proposed exchange-traded funds, which have a smaller commission than index funds and allow investors to buy and sell shares at any time without any additional charge.