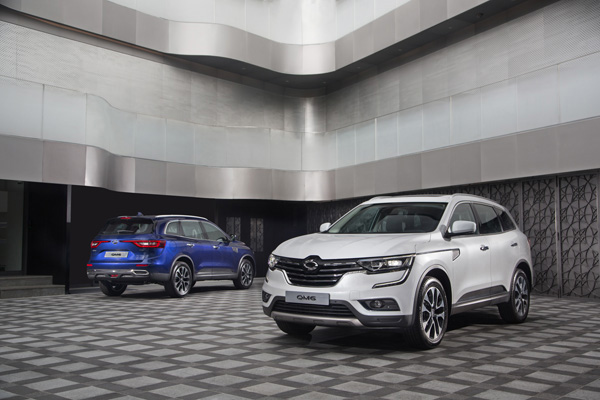 Renault Samsung’s latest sports-utility vehicle model QM6 hits the roads in Korea on Friday. Prices start at 27.4 million won (24,560 dollars) for a two-wheel drive vehicle and 30.7 million won for a four-wheel drive. The French carmaker hopes to build on the success of its SM6 and become one of the three best-selling carmakers in Korea. [RENAULT SAMSUNG]

Renault Samsung is vying to grab the third spot in Korea’s car market by introducing its latest sports-utility vehicle - the QM6 - as SUV popularity surges worldwide.

“We want to change the landscape of the domestic midsize SUV market, in which 90 percent of it is dominated by two models,” Renault Samsung Korean CEO Park Dong-hoon said at a media event on Wednesday.

“We focused on the driving experience for off-road courses and four-wheel driving (4WD) technology on ordinary roads to allow stable driving,” he added.

The latest QM6, which hits Korean roads Friday, uses the powertrain and 4WD technology topped with Renault’s sophisticated design, which won accolades when it was showcased in its flagship medium-sized SM6.

The QM6 is the French carmaker’s second model to launch this year after first midsize sedan SM6 sold 37,000 units since March. The automaker’s initial goal was to sell 50,000 units within a year. The sedan’s sophisticated design and price competitiveness was a breakthrough for Renault Samsung, which had been locked in the lower tier of the domestic car market.

To continue the momentum and perhaps enter the top three sales bracket - currently occupied by Hyundai Motor, Kia Motors and GM Korea - Samsung Renault invested some 380 billion won ($340.6 million) on research and development of the QM6.

The automaker already has sold 5,500 units through preorders within the first 10 days. Park said the automaker wants to sell an average of 5,000 units of the QM6 model each month.

The car will be manufactured in Busan and exported to 80 countries and under a different name - the Renault Koleos. China, on the other hand, will manufacture the Koleos in its Renault-Nissan Chinese factory.

The QM6’s exterior design is similar to that of the SM6 and is equipped with a full C-shaped LED headlight and a 3D-type LED rear light, which a Samsung Renault spokesman said is intended to show sisterhood with the previous successful model.

The interior has an 8.7-inch touch screen for navigation and multimedia use and premium Bose speakers to provide surround sound.

Some of the extra functions include technology that locks all four doors automatically when the driver goes further than two meters from the vehicle. The rear part of the automobile is installed with a sensor that automatically opens the trunk with a swing of a foot under the car’s rear.