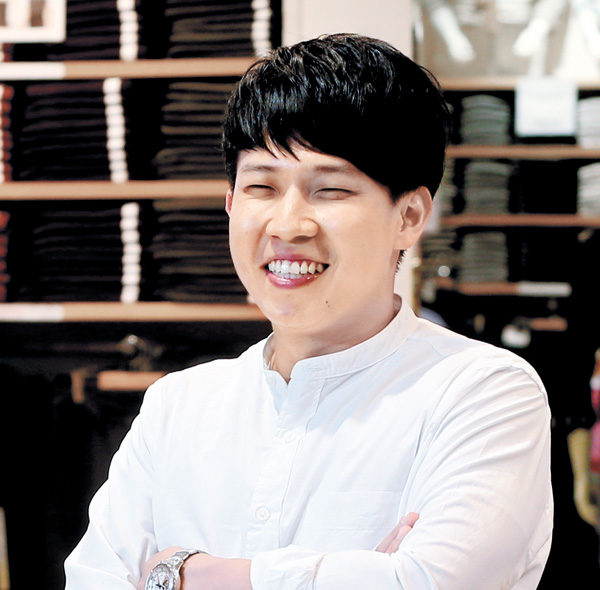 An old adage in marketing says that a good salesperson can sell a refrigerator to an Eskimo.

The same might hold for someone who can sell thermal clothing in a tropical climate.

Chung Gun-woo, chief manager of a Uniqlo branch in Johor Bahru, Malaysia, has seen sales at his store grow more than fourfold since he took up his post last March, largely from the company’s warm Heattech products.

It was a surprise even to those at Uniqlo’s headquarters, who couldn’t understand why their thermal wear was doing so well in a country where the average temperature throughout the year tops 27 degrees Celsius (81 degrees Fahrenheit).

But Chung was confident the products would sell.

“I observed the types of clothing customers have interest in and actually buy,” Chung said. “Johor Bahru is very close to the Singaporean border, and there are actually many people coming from Singapore to buy Heattech products.”

Chung interviewed customers at his store and even visited a branch in Singapore to conduct further research.

“I found out that Singaporeans are buying such thermal wear and winter clothes in general to prepare for vacation to various countries around the world that are relatively cooler, such as Korea, Japan and Canada,” he said.

As a result, Chung increased the store’s stock of winter clothing, including thermal underwear products, and sales rose 300 percent within a year.

There was some luck involved as well. Malaysia’s currency tumbled last year, and this sent more Singaporeans across the border to Johor Bahru seeking lower prices.

Chung’s gamble turned into a jackpot. His store is now ranked second among the world’s 1,700 Uniqlo branches around the world in terms of sales growth and customer satisfaction.

The manager cited his previous part-time work experiences for his success.

“I have done various part-time jobs at clothing shops ever since I was in college, and I found it very fun to meet and deal with various kinds of people,” Chung said. “People have to find their own way without thinking too much about what others tell them to do in order to be successful.”

But his way to the top management post at his store wasn’t always easy. “I worked at Uniqlo Korea for two years and found an opportunity to become a manager in Malaysia,” Chung said. “Then I came to Malaysia, but for more than a month, I had a hard time at work due to the cultural differences.”

According to Chung, Malaysian employees weren’t able to immediately adjust to his fast-paced work style, known in Korean as ppalli ppalli.

“At first, I only gave them orders for what to do but later found ways to actually have them do what they can do by communicating with them,” the manager said.

Chung first joined Uniqlo in 2012, where he started off cleaning floors and dusting mannequins. He recalls many of his college peers asked him why he took up a cleaning job at Uniqlo after graduating from a four-year university.

But Chung said he endured all the hard work in order to become who he is now and overcome the prejudice against people who don’t work in a corporate setting.