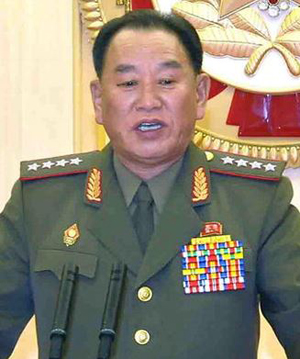 Kim Yong-jin, North Korea’s cabinet vice premier, was confirmed by the government to have been executed by firing squad in July on charges that he sat arrogantly during a meeting of the rubber-stamp parliament presided over by Kim Jong-un, incurring Kim’s wrath.

The ministry also reported that Kim Yong-chol, director of the United Front Department (UFD) that handles inter-Korea activity, was sent to a farm for ideological re-education for a month between June and July for an “overbearing attitude.”

The ministry’s announcement Wednesday came as a correction to a report by the JoongAng Ilbo on Tuesday on executions of two top officials in Pyongyang, citing a North Korea source. The JoongAng erroneously reported that former agricultural minister Hwang Min and a senior Education Ministry official named Yi Yong-jin were executed by firing squad.

“There have been many reports recently surrounding executions of North Korean officials,” said Jeong Joon-hee, Unification Ministry spokesman, during a regular briefing. “Vice premier Kim Yong-jin was executed and UFD director Kim Yong-chol was sent for revolutionary re-education. And Choe Hwi, a vice director of the Propaganda and Agitation Department of the Workers’ Party, is currently undergoing such re-education.”

Jeong declined to go into details over why the vice premier was executed or when or where it took place.

A ministry official speaking on the condition of anonymity said Wednesday the 63-year-old vice premier was arrested after he was seen sitting in a chair “with a bad attitude” during a June 29 parliamentary meeting presided over by North Korean leader Kim. At that meeting, Kim was named chairman of the newly created State Affairs Commission, which supplanted the National Defense Commission.

“The trouble for Kim began after he was seen sitting with bad attitude during a meeting of the People’s Supreme Assembly. He was later accused of being anti-revolutionary following a probe and a firing squad execution was carried out in July,” said the official.

Kim Yong-chol, who took the helm of the UFD after predecessor Kim Yang-gon was killed in a car accident in December, was temporarily purged by being sent to a farm in the countryside to undergo ideological reeducation for a high-handed attitude at his job, the official said.

Kim, former head of the North’s powerful reconnaissance bureau, was said to be responsible for the sinking of the Cheonan warship in the Yellow Sea on March 26, 2010, which killed 46 sailors. Kim’s appointment, following the unexpected death of Kim Yang-gon, a seasoned diplomat with years of negotiation experience with the South, caused alarm in the South because of his hawkish reputation.

“Considering that Kim Yong-chol must be under pressure to show loyalty [to the Kim leadership] upon his return to power, the government is paying close attention to any signs of provocations by the North,” said the official.