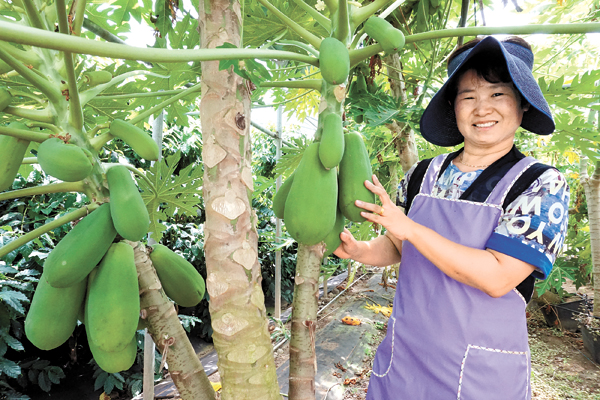 Kim Soon-il, a representative of Yujin Farm, poses with the papaya trees

Things are heating up on the subtropical island of Jeju as temperatures progressively rise and local farmers try their hands at growing tropical crops on a scale that would previously never have been possible. 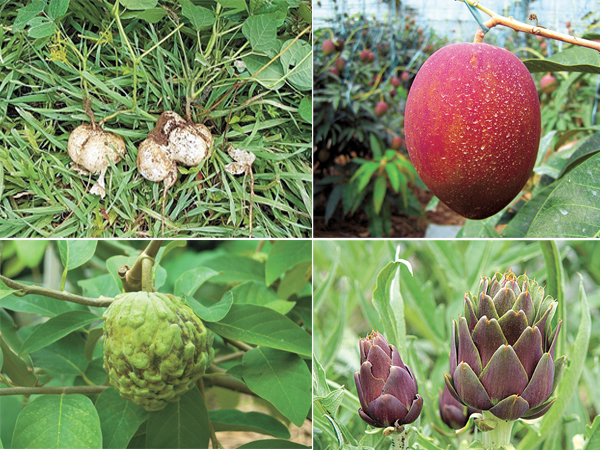 As a result, foodies and restaurateurs will soon be able to cook or dine on fresh goya (bitter gourd) masala, jicama salad, spinach artichoke dip, papayas and decadently sweet slices of atemoya, the world’s most sugary fruit.

This is because South Korea has seen a rise of about 1.6 degrees Celsius (35 degrees Fahrenheit) in average temperatures over the past century, according to the Rural Development Administration. If this continues, average temperatures may rise another 4.6 degrees by 2071, specialists say, inching Jeju closer toward a fully tropical climate. But some farmers are enjoying the warmer weather.

Yujin Farm in Seogwipo, for instance, covers 66,166 square meters (6.2 hectares) of land and now uses 1,488 square meters to grow papayas. The farm started growing papayas on a small scale a few years ago as a way to provide some of its foreign workers with a taste of home. From there, the project took off.

“Greenhouse temperatures near the shores of Seogwipo are about five to six degrees Celsius in the wintertime,” said Kim Soon-il, a representative of Yujin Farm, “and since there’s no need for additional heating, we started growing papayas on a large scale.”

Papayas are normally grown in tropical regions, and until recently, growing them in Jeju was nearly impossible as it required expensive heating equipment. But with rising temperatures due to global warming, papaya farming has become a paying business — and an incredibly lucrative one at that.

A single banana tree yields about 25 kilograms (55 pounds) of bananas, while one papaya tree can yield about 40 kilograms of papayas. Moreover, Yujin Farm has been selling papayas for about 3,000 won ($2.95) per kilogram for the past two years, and this year’s market price is 4,500 won per kilogram.

The farm expects sales of about 80 million won by cultivating 18 tons of papayas, and the net profit is 70 to 80 percent of sales, largely since no heating method is required. Compare that to tangerines, which are sold at 500 won per kilogram. As such, Yujin Farm is planning to more than double its papaya cultivation.

Warmer winters are also making way for the cultivation of other tropical and subtropical crops.

Farms for apple mangos, which only grow when temperatures are kept above 15 degrees Celsius, are concentrated in Seogwipo, where temperatures rarely drop below zero.

“With the development of heating technologies,” said Kim Yeon-jin, representative of Taeseong Mango Farm in Seogwipo. “Many farmers growing tangerines in greenhouses have switched to apple mangos.”

Atemoyas, a kind of tropical fruit, have also been cultivated on Jeju since 2011. First bred in America, atemoyas are known to be the highest in sugar content of all fruits. Vegetables such as jicamas and flowers such as artichokes are also drawing attention.

“Currently, subtropical crops grown in Korea are proving to be fresher and more delicious compared to those imported,” said Moon Du-kyeong, a research fellow at the Rural Development Administration. “We are trying to aid the cultivation of other new tropical crops, as well.”