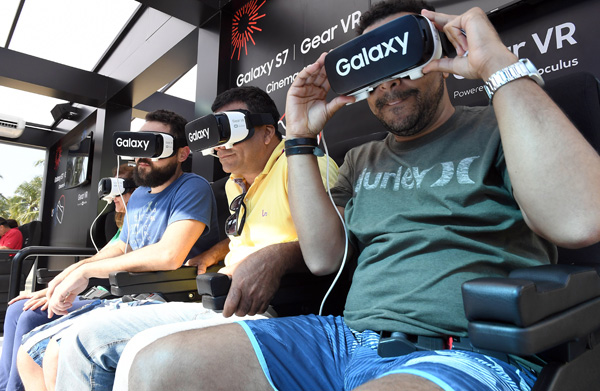 I covered the 2016 Summer Olympics in Rio de Janeiro. It was heartwarming to watch our athletes do their best. They may have fallen short of expectations on their medal count, but their spectacular performance on the global stage truly made their countrymen proud.

Female golfer Park In-bee left a deep impression on the audience at home and abroad. Despite injuries that made the 28-year-old LPGA hall of famer consider giving up on going to the Olympics, she stayed focused throughout the four-day tournament to win gold. She shone at critical moments. The way she calmly rang up three consecutive birdies after messy bogies amidst a headwind in the final round was incredible.

The Rio Olympics reaffirmed the spirit of challenge and strength of our young people. Who can scold the young for being lazy and weak? If that’s their reputation, it’s the fault of an older generation that failed to provide a stage for them to demonstrate their potential.

Another winner from the Rio Olympics is Samsung Electronics. Although it did not take a medal home, the company achieved the most among corporate sponsors of the Rio Games. According to a Brand Agility Index study by PR firm Waggener Edstrom Communications, Samsung clocked up the most global mentions during the Olympics. The Galaxy Studio offering experiences with Samsung gadgets at the Olympics Park drew 1 million visitors.
Samsung’s share in the Brazilian smartphone market shot up to 54 percent from 48 percent last year. More than half of smartphone users in the 200 million Brazilian population own a Samsung phone. Apple’s share is a mere 5 percent. Chinese brands Xiaomi and Huawei, which made forays into Brazil three years ago, are actually getting ready to pull out of the market.

Samsung Electronics’ local manufacturing and sales staff number 8,000. Not many think of Samsung as a foreign brand. Their image of the brand is as a reliable workplace and maker of products and services that contribute to their economy. Samsung Electronics has topped the ranks in various local polls for best awareness, respected enterprise and the most desired workplace in Brazil.
In the quarter that ended in June, Samsung Electronics raked in over 8 trillion won ($7.13 billion) in operating profit. Its stock price hit a record high of 1.6 million won. The price-earnings ratio (P/E) of Samsung Electronics, or the ratio of its stock price to its per-share earnings, is 13, more or less on a par with Apple.

The company’s P/E ratio had long hovered at 7 to 8. The spike suggests Samsung Electronics has been separated from the overall discounts on Korean stocks and recognized as a global enterprise with solid growth potential. Overseas revenue and profits against the total are expected to exceed 90 percent this year. Of 320,000 employees, 70 percent are local hires and less than 100,000 are based in Korea.

Both Park In-bee and Samsung Electronics are Korean champs. They have stayed ahead in their fields through strong skills, mentality, and inventiveness.

In her field, Park has an army of promising local candidates to succeed her, while Samsung Electronics does not. Korean golfers are dominating the global stage. Newcomers cannot be bred in the local industrial habitat in the same manner. Many stars must sprout in the diverse areas of bioengineering, medicine, tourism, and education beyond manufacturing.

I have faith that Samsung Electronics will last long. I hope Hyundai Motor and LG Electronics will follow suit. Korea must leave the large companies alone. We should cheer them as we root for world champions like Park.