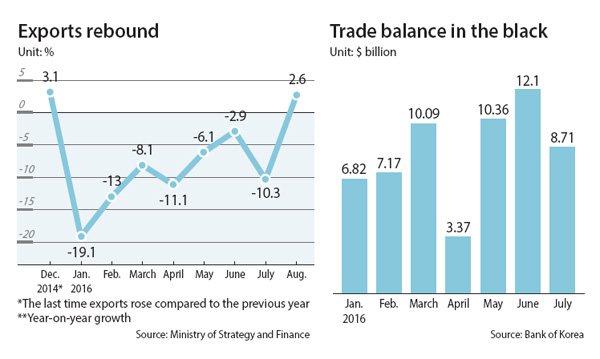 The government is optimistic that Korea’s economy might be bouncing back, after August marked the first time in 19 months that exports grew year on year and the current account surplus continued into July, suggesting the nation’s fundamentals remain strong.

The Ministry of Trade, Industry and Energy even added Thursday that last month’s export growth could have reached as high as 5 percent if automotive labor unions did not go on strike.

Even with the rosy numbers, though, the government was cautious in predicting the favorable momentum would continue, noting that factors like a possible interest rate hike by the U.S. Federal Reserve and continuing volatility in international oil prices could pose downward risks.

Exports in August rose 2.6 percent compared to a year ago to $40.1 billion, breaking a 19-month losing streak, largely thanks to higher demand for major Korean export items including Samsung Electronics’ recently-launched Galaxy Note7, which has been popular worldwide for its iris-scanning function.

“Overall, exports finally bounced back for the first time in 20 months, the first time since December 2014, as increased exports of high-demand electronic products offset the decline in the automobile sector,” said Cheong Seung-il, deputy minister of trade, industry and energy.

“There were two more business days this year compared to a year ago, and demand for computer products and other electronics rose significantly overseas ahead of the new school year coming up in September,” said Lee Min-woo, a director at the Trade Ministry.

Automotive exports, though, recorded their worst performance in six and a half years since February 2010, largely due to a union strike. The Trade Ministry estimates the strike cost the car industry $920 million and 65,700 units. Car exports last month fell 14.8 percent year on year to $2.3 billion.

When asked if August’s growth might have come from an unusually poor performance last year, the government agreed it had some influence. Exports tumbled 15.2 percent year on year last August, and the month saw two fewer working days.

Still, the ministry maintained that the turnaround last month still holds significance because major export items saw a significant recovery that could continue for the rest of the year.

“Even though there have been five months so far this year that had more working days than a year earlier, exports still failed to bounce up,” Cheong, the deputy trade minister, said. “Major export goods performed much better [than in previous months].”

Some outside watchers remain skeptical about the export growth’s significance, precisely because it is being compared to last year’s poor August performance and because this August saw more working days.

“September data won’t be as bright as last month’s since there will be fewer business days due to the long Chuseok [Korean Thanksgiving] holiday coming up,” said Lee Sang-je, an economist at Eugene Investment, “and the data for last September was not as bad as in August.”

“It appears the Chinese are still interested in purchasing Korean goods, especially cosmetics,” Park said, “and the number of Chinese tourists that entered Korea in August is expected to reach an all-time high, which indicates that Thaad didn’t have much impact on their interest in Korean goods.”

“Exports through e-commerce rose significantly compared to the past and are becoming one of the major export channels, or a newly-rising contributor to exports, here in Korea,” said Cheong, the deputy trade minister. “The government has raised the export target for e-commerce this year from 1.5 trillion won [$1.34 billion] to 2 trillion won.”

In fact, the export volume through e-commerce during the first half of this year rose 85.7 percent from the same period last year to near 1 trillion won, according to the ministry.

The Bank of Korea’s report Thursday on the current account balance in July also showed that the nation’s fundamentals remain strong, marking a surplus for 53 straight months. However, the size of the surplus has shrunk due to smaller exports that month.

The surplus in July amounted to $8.71 billion, down 27 percent from $12.1 billion in June, which was an all-time record. The surplus size is only 72 percent of the June figure.

Despite the positive reports, the government is nonetheless bracing itself for a number of possible risks to the Korean economy, including possible instability in the global financial market caused by a U.S. Fed interest rate hike in the coming months and continuing volatility in crude prices and foreign exchange.

The Trade Ministry said it would offer various supports to maintain the export recovery trend by helping local companies market overseas. The government said it would also expand the government’s financial aid for trade insurance by 6.5 trillion won using its supplementary budget for the rest of the year.

However, the government said it doesn’t expect Hanjin Shipping’s recent debt crisis to have too much of an impact on exports, since their market share is not as big.

“Shipping accounts for some 70 percent of total export methods used in Korea, but we are estimating that only 6 percent of them are managed by Hanjin,” said Deputy Trade Minister Cheong.