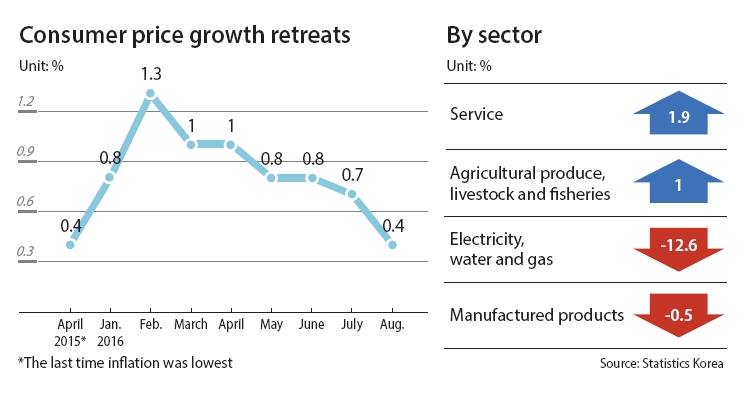 Inflation fell to the lowest rate in 16 months, remaining below 1 percent for four consecutive months as crude prices continued to slide and the government discounted power bills to ease the burden caused by the increased use of air-conditioners during the heat wave.

However, despite the low inflation rate, Koreans, especially those in middle and low-income households, are burdened by the continuing price hike in produce, which is expected to worsen with the sluggish economy.

In August, the country’s consumer prices rose 0.4 percent year on year, the lowest growth since April 2015, when the prices also rose 0.4 percent, the government said on Thursday.

“The slow growth rate is mainly due to the government’s decision made last month to give discounts on electricity bills for households,” said Yoo Soo-young, a director at the Ministry of Strategy and Finance. “The inflation rate in August would be around 0.8 percent if the changes in electricity billing systems were not made.”

In fact, the government has decided to discount household electricity bills from July to September, as lawmakers and many residents found the current progressive billing system unfair or said it burdened households. During the heat wave, angry residents called for changes to the system.

“The fall in crude oil prices not only impacted the price of petroleum products but also dragged down the overall prices for electricity, water and gas,” Yoo said.

Prices for electricity, water and gas fell 12.6 percent in August compared to the previous year, contributing to lowering inflation by 0.57 percentage points.

Prices of fresh produce rose 2.8 percent compared to the previous year and the prices of other food, including agricultural produce, livestock and fishery products increased 1 percent.

“The prices of vegetable rose significantly from the previous year due to the hot weather,” said Yoo at the Finance Ministry.

Service prices, including rent, utility bills, travel and dining, in August increased 1.9 percent year-on-year, contributing to raising overall inflation by 1.07 percentage points. The cost of rent, including jeonse, or lump-sum rental deposits, was up 2.5 percent compared to the previous year.

The price of the Korean liquor soju sold in restaurants and bars rose 13.2 percent, and the prices of raw fish meals at restaurants increased 5.2 percent, according to Statistics Korea.

Consumer prices rose the most in Busan by 0.8 percent, followed by Seoul (0.7 percent) and Gwangju (0.6 percent). Inflation was lowest in Gumi, North Gyeongsang, and Jinju, South Gyeongsang, which each saw inflation drop 0.3 percent in August.

“The discounts on electricity bills are going to expire in October and we expect the inflation rate to move up to around 1 percent later this year as it did before,” said Yoo. “Global oil prices are showing signs of recovering and it appears that some of the downward pressure from overseas will be reduced.

“The government will monitor consumer and global oil prices thoroughly and will try its best to stabilize the local retail and agricultural industries so that they can be prepared for Chuseok.”