Purchases made on mobile devices hit an all-time record. 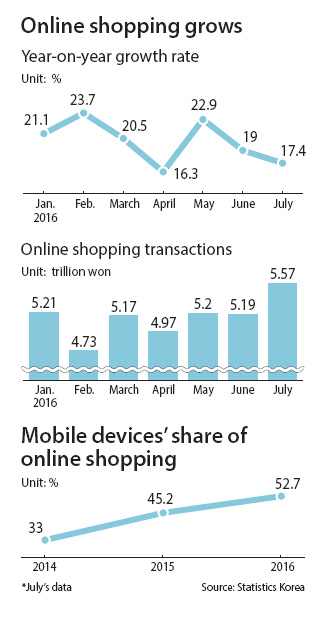 According to Statistics Korea, mobile shopping in July surged to 2.93 trillion won ($2.61 billion), a 36.9 percent jump compared to the same month last year. This is a monthly record. Shopping on mobile devices now accounts for 52.7 percent of online shopping, also a record.


Overall online shopping transactions expanded 17.4 percent from a year ago to 5.56 trillion won.


Shoppers loaded up their digital shopping carts with summer vacation necessities, including swimsuits and flip-flops, while Chinese tourists on vacation in Korea also contributed.

“Online shopping transactions rose in July as more Koreans purchased travel and other reservation services, such as movie tickets,” Son Eun-rak, a director at Statistics Korea.

Koreans traveling abroad rose 24.5 percent, from 1.68 million last July to 2.09 million, according to Statistics Korea. The number of moviegoers jumped 11.9 percent from 23.43 million to 26.22 million during the same period, largely thanks to hit movies including “Train To Busan,” “Operation Chromite” and “Now You See Me 2.”People spent 15.2 percent more on travel and reservation services compared to the previous year, and the figure for cosmetics jumped 46.3 percent.

“There were more Chinese tourists visiting Korea this summer compared to the previous year,” said Son, “and sales of cosmetics, which are very popular among Chinese, increased significantly.”

According to Statistics Korea, some tourists from China buy goods from Korean online retailers after they enter the country, particularly duty free products, and pick them up at airports before returning home.

“Tourist numbers increased significantly due to the base effect from the Middle East Respiratory Syndrome that hit the country last summer,” said an official at Statistics Korea.

“There were more quick delivery services introduced here in Korea by a number of online retailers and private delivery service providers, and this raised demand for shopping online.”

Mobile shoppers accounted for only 29 percent of all online shoppers in April 2014. The figure exceeded the 40 percent level early last year, finally surpassed 50 percent in December and continued to increase to 52.7 percent in July.

Shoppers buying goods at online-only retailers rose 9.1 percent year-on-year in July, while the figure rose 32.8 percent for retailers with both online and brick-and-mortar stores.