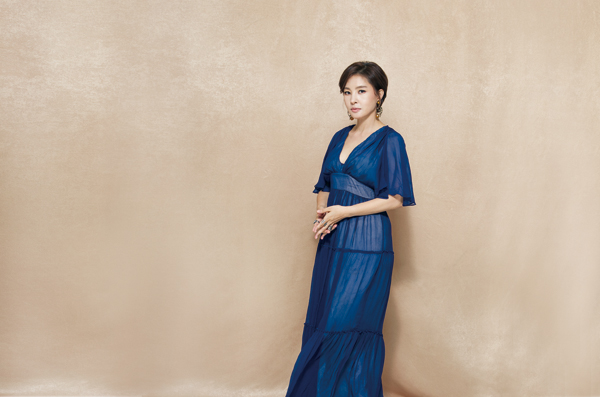 Korean actress Park Ji-young, known for her full lips and Old Hollywood glamour, was one of the most sought-after stars of the ‘90s.


She represented traditional beauty in TV commercials and dramas. She has mostly portrayed elegant, a sometimes cold-blooded characters.


Even in the 2000s, she maintained this image, as seen in 2010 film “The Housemaid” where she plays a worldly and greedy mother of Hae-ra (played by Seo Woo), whose married to a handsome businessman.


But Park assumed a whole new role in “The Queen of Crime,” released last month. She plays a middle-aged woman, Mi-kyeong, who runs a hair salon outside Seoul and gives illegal botox injections to her customers.


One day her son, Ik-su - who’s studying for a bar exam in gosiwon, small crammed housing for those preparing for national exams in Korea - calls her and tells her that he’s been charged a whopping 120,000 won ($107) for a monthly water utility fee.


She comes to Seoul to play detective and find out what’s behind the outrageous utility bill, using her good intuition and intrusive character in the comic thriller. 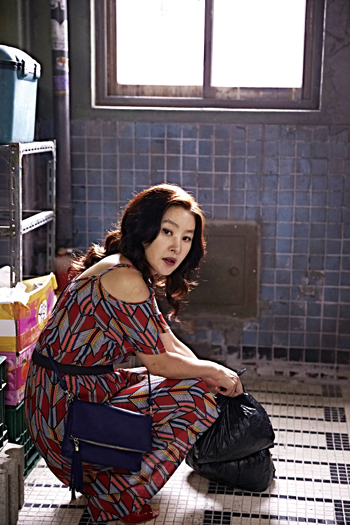 Q. What drew you to play Mi-kyeong?

A. She is full of positive energy and love. She has good intuition because she’s interested in so many things. She is affectionate toward Gae-tae who works in the superintendent’s office in the gosiwon complex; Deok-su who rarely studies; and even Jin-suk, a game addict. I got married young and had children at an early age too. So I too am affectionate toward young people and click well with young actors who are the same age as my daughter.

It seemed like you were really enjoying playing her. Was that the case?

Yes. I felt that she was completely me and I was her. In fact, the me that only my family knows appears in the film. And when Mi-kyeong holds someone’s hands for instance, it’s really her reaction and not my calculated move.

Did you have complete trust of director Lee Yo-sup?

At first I was curious about him. I thought to myself, ‘He’s not a young female director. Who’s this young man who is trying to make a feature film with an average middle-aged woman as the sole lead?’ It’s true that in Korean films, such films are rare. Most middle-aged women play a supporting role, as someone’s mother who’s highly maternal. It’s also quite impressive that he saw Mi-kyeong in me, as I’ve mostly played charismatic characters. Also, as I read in the script the scene where Mi-kyeong prepares a homemade meal for Gae-tae, who grew up pretty much an orphan, I thought, “this director knows what motherhood is about.”

Mi-kyeong’s costumes were quite interesting too. They look cheap and outdated yet they are quite flamboyant and colorful. What do you make of it?

It was all Director Lee’s idea. At first, I didn’t really get it. But when I thought about it hard, I got it. Mi-kyeong was Miss Chunhyang (a beauty pageant in Korea) and the photo of her participation in the pageant is hung on the wall of her hair salon. I myself was Miss Chunhyang. She’s been the “pretty one” so she has the pride. She also tries hard to give all she can to her son so that he doesn’t get discouraged by his peers. That’s why she wears such clothes, I think. Clothes in a way tell people’s past and character.

What’s your secret to balancing work and life as a mother of two daughters?

When they were young, I made a rule for myself: shooting just one drama a year. I restrained my ambition in my career because as much as I love acting, it isn’t everything. My family and friends are just as important. So I thought I had to divide my energy (between work and family.) Now my eldest daughter is in college and the youngest daughter is a junior in high school. My secret to balancing is focusing on what’s now. I didn’t want to be one of those mothers who miss home when they are at work and who miss work when they are at home. I decided not to feel sorry to my kids because I came to work and focus on what I’m doing in the moment.

Do you think your attitude towards work has changed over the years?

Yes. When I was young I think I wasn’t the greatest actress out there. But I still got the main roles and gigs on TV commercials.

I also learned that popularity and fame fade away very quickly. So now I’m more about enjoying the process. I also recently shot a 10-minute, low-budget short film (by a rookie director), “The King of Jokgu” (2014), which was fun.