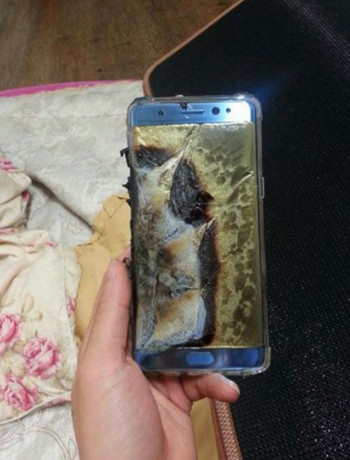 A photo of a burnt Galaxy Note7 phone in the wake of an explosion on Aug. 23 that a user posted online on Aug. 24. It was the first of nine cases reported. [PPOMPU]

The government may investigate a series of explosions of Samsung Electronics’ Galaxy Note7 phablets after the world’s top smartphone producer suspended domestic sales of their hit mobile device on Aug. 29.

Samsung may have to go so far as to recall all units sold thus far, the worst-case scenario.

The Korea Agency for Technology and Standards under the Ministry of Trade, Industry and Energy on Thursday asked Samsung to report on the cause of the explosions. Samsung will be slapped with a fine of up to 30 million won ($26,736) if it fails to report within two days of the order.

“We may start our own investigation depending on the result of Samsung’s study [into the cause of the explosions],” said the Korea Agency for Technology and Standards in a release. “We expect Samsung to come up with the report as soon as possible given the urgency of the issue.”

The agency says an exploding smartphone is a “critical flaw” under the Product Safety Act. The act allows the government to recommend or order a business owner to carry out recalls of products that cause or are likely to cause danger or harm to consumers’ lives, bodies or property due to any serious defect. A company may voluntarily recall products before any government order.

“We are in the final stage of finding the cause of the Galaxy Note7 explosions,” said a Samsung spokesman, adding the company would come up with an official statement today at the earliest.

Regarding speculation that Samsung may recall all Note7 sold, the spokesman said the company will cope with the situation after the cause is revealed. Such a recall would be the first of a Samsung smartphone model.

Released on Aug. 19, the Note7 was a big hit, selling 400,000 units in Korea in just 10 days. Customers were excited by its iris scanning security function and waterproofing.

But users of the new phablet began posting online tales and photos of their phones exploding starting Aug. 24. In the initial such instance, a user said the phone started burning and exploded while charging on Aug. 23 while he was sleeping, four days after he received the phone. A photo showed a half-burnt phone. The second and third cases were reported from overseas. Some suspected that use of a non-Samsung charger was the fault, but that theory evaporated after a report that the third exploding phone wasn’t even connected to a charger. The latest case was the ninth, which was reported from China on Thursday.

Experts suspect the battery is the issue. Lithium-ion batteries for smartphones can catch on fire when they reach 80 degrees Celsius, which rarely happens. But a power management integrated circuit can fail.

Before the Galaxy S6 model, Samsung’s key battery supplier was its own affiliate Samsung SDI. But the company diversified suppliers as global orders surged. Industry insiders say half of the Note7’s batteries come from SDI; the other half are supplied by two to three Chinese manufacturers. The source of the batteries in the exploding phones hasn’t been disclosed.

Some Note7 users and people who have preordered the device are demanding refunds or recalls.