Hanjin’s ships being turned away from ports

Hanjin’s ships being turned away from ports 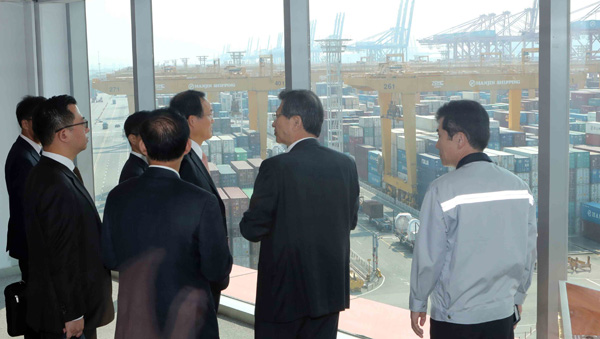 Officials from the Seoul District Court’s bankruptcy division, including Judge Kim Jung-man, third from the right, take a look at Busan Port, where Hanjin Shipping’s containers are stationed, on Thursday. [SONG BONG-GEUN]

Hanjin Shipping’s application for court receivership has started a ripple effect of consequences, despite the government’s promise to limit the fallout.

A day after the board of directors of Hanjin Shipping, the nation’s No. 1 shipping company and the world’s seventh largest, applied for court receivership after failing to satisfy its creditors with a turnaround plan, Hanjin Shipping container ships have been stranded off the coast of Busan. Three container security service companies in the southern city’s port are refusing to dock its container vessels until the company pays bills due.

According to Hanjin Newport, a terminal manager whose majority stakeholder is Hanjin Transportation, four Hanjin Shipping vessels with cargo from Europe, the Middle East, the Americas and Southeast Asia have failed to dock at the Busan port. They were supposed to offload containers or load up with others before proceeding to their next port of call. These vessels are currently idling at a nearby port.

If the container security service companies, which lash containers together on ships, continue to refuse to dock the ships, more incoming Hanjin Shipping vessels will also be stranded.

“If the container security service companies continue to refuse to work until Sept. 2, a total of eight vessels will be stranded,” said an official at Hanjin Newport.

“For the last three months Hanjin Shipping owes us 800 million won ($713,000),” said an official at one of the companies, Jaesung Marine Service. “How can we work when it will become much more difficult to get paid [by Hanjin Shipping].”

The container security service companies are owed around 1.7 billion won in total.

Meanwhile, the Seoul court also accepted a request by the shipping company to freeze all its assets, which is an unusually fast decision.

The decision to freeze assets is considered a reaction to a threat that the assets will be seized. One of the company’s vessels, the Hanjin Rome, was provisionally seized in Singapore for unpaid charter fees on Tuesday after creditors rejected the management turnaround plan.

The gloom is spreading, as Hyundai Heavy Industries stopped operations at one of its docks in Ulsan. The company has a total of eleven docks operating in the country, most of them in Ulsan and one in Gunsan, north Jeolla.

For the first time in 44 years, the company has decided to pull the plug on one of its docks due to a drying up of orders.

The dock that HHI decided to close produced three to four ships a year. According to the company, the dock hasn’t worked on a ship since July and was being used for ship repairs.

The accumulated revenue for this year until July was $1.2 billion, a 71 percent decline compared to the same period last year.