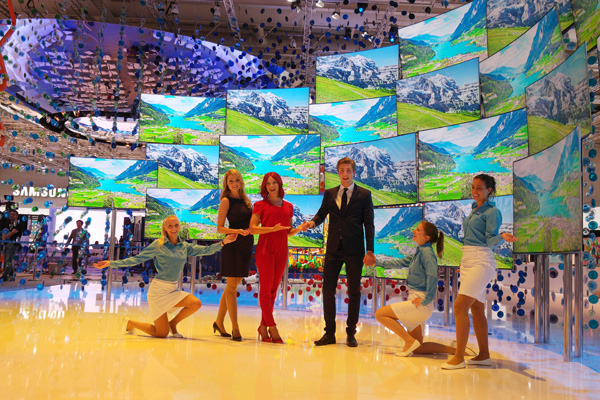 Samsung Electronics unveiled five new models of its super ultra high-definition (SUHD) TVs, a range of premium home appliances and two new smartwatches in Berlin on Thursday, ahead of the IFA, Europe’s biggest annual tech exhibition, which kicks off in the city today.


The company’s new quantum-dot SUHD televisions expand the number of models in its product lineup to 19, catering to a wide range of demographics. Samsung has been conducting research and development on quantum-dot TVs since 2001 to gauge its potential to become a dominant player in the market for high-end, large-display TVs. The world’s largest TV and smartphone maker unveiled its first quantum dot SUHD television last year.


Quantum dots are nanosize crystals made from semiconductor materials that help three primary colors become more clearly distinguished compared to conventional televisions. Expansion in the SUHD market indicates that Samsung is distinguishing itself from its rival LG Electronics, which has been touting organic light-emitting diode (OLED) TVs in its premium lineup. LG installed a huge OLED TV gallery inside the IFA exhibition hall.


Samsung’s new quantum-dot SUHD TVs will have display sizes ranging from 43 to 88 inches.


The manufacturer is occupying the largest exhibition space at the IFA tech trade show, where it also is promoting refrigerators and washing machines under the Family Hub luxury brand. 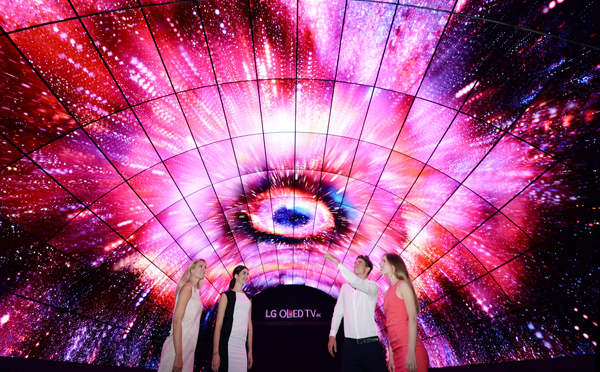 On Wednesday, Samsung unveiled a new wristwatch, which includes support for contactless payments, as the company pushes to catch up to Apple Inc. in the nascent market of wearable products.


Samsung introduced the Gear S3 Classic and Gear S3 Frontier - two variations of the same base product, which support Samsung Pay, and, on the Frontier version, also allow users to make phone calls or even book an Uber ride from the device without the need for a smartphone. The new Gear S3 models are expected to be on sale before the end of the year. 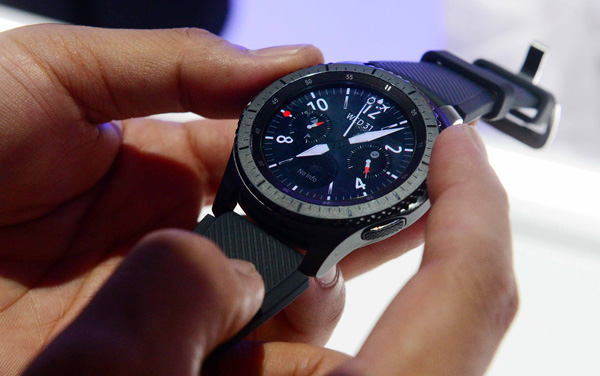 Samsung Electronics unveiled its nextgeneration smartwatch Gear S3 on Wednesday at the IFA.[NEWSIS]


“We want people to be able to leave their phone at home and use only the Gear,” Tony Kim, from Samsung’s global product planning team, said ahead of the product launch.

Samsung, which introduced its first wristwatch device in 2013 ahead of Apple and other rivals to carve a share of the just-forming wearable market, failed to draw attention in the new watch category. But it has steadily been increasing the feature sets of such products, making them less dependent on a connected phone.

Apple is slightly ahead of Samsung in rolling out its Apple Pay contactless payment business - currently present in nine regions compared to Samsung’s eight. Both systems let consumers register a credit or bank card to their phones to make small contactless payments in stores, taxis or on public transportation. Both companies now have wearables that support the technology.

But it’s the cellular features of the Gear line that may be a sore spot for Apple, which had been trying to incorporate similar technology into the next version of the Apple Watch but ran into delays. The feature in Samsung’s model allows the watch to have its own phone number for making calls, sending text messages or using apps from Spotify or Uber.

Only the U.S. and Korean versions of the Gear will support this feature. Consumers in other regions will need Wi-Fi or to be connected via Bluetooth to a compatible phone.

Samsung’s incorporation of cellular connectivity into the previous Gear models was a key contributor to the product line’s success, according to IDC market research. “Focusing on the telco channel to drive future success in telco-driven markets is likely to remain the core strategy for Samsung moving forward,” the group said.

Other features of the Gear S3 include a 1.3-inch color display, a GPS location sensor, 4GB of internal memory, wireless charging, and a battery the company says will last between three and four days on a single charge. It’s also resistant to water and dust.

Just as Apple’s smartwatch does not connect to Samsung’s phones, Samsung’s Gear S3 doesn’t connect to its rival’s iPhone, although it’s compatible with many competing Android devices, such as those manufactured by Sony and LG.

“We started a beta program for iOS in Korea on the S2. We opened it in beta to get feedback from our users about their experience,” said Kim. “There are no plans at this point to do this with the S3 but we’ll continue to revisit as we go along.”

“Smartwatches will be the fastest growing segment of the wearables market in 2016, and 2017 promises to be an even bigger year,” said Morgan Evans, head of communications for Samsung in Europe. The market for smartwatches, specifically, “will double in 2017,” he said.