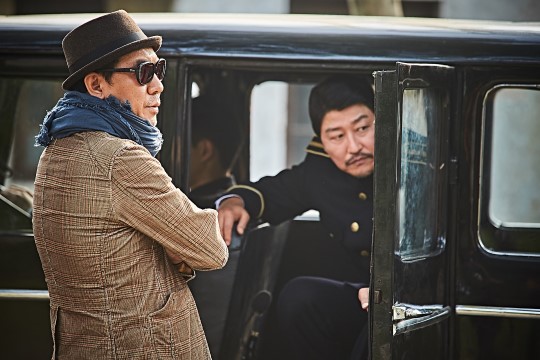 Kim Jee-woon, left, and actor Song Kang-ho on the set of “The Age of Shadows.”[JOONGANG ILBO]

Director Kim Jee-woon and actor Song Kang-ho have reunited again through “The Age of Shadows,” the fourth project that the two have worked on together.

Song and the director, who is often dubbed ‘The Stylist’ in the country’s film community for his excellent cinematography, first met while they worked on “The Quiet Family” (1998), Kim’s first feature film.

The second project the two worked on together was “The Foul King” (2000), in which Song plays the role of a rank-and-file employee who begins to study wrestling after work.

“The Good, The Bad, The Weird,” (2008) the third project of the two, was a western genre film with Korean touches set in 1930s Manchuria.

Kim calls Song the “biggest weapon” that he has to express the sentiments of the characters in his films.

During a recent interview with JoongAng Ilbo, an affiliate of the Korea JoongAng Daily, Kim said, “Song is one of a few Korean actors who can play the role of Lee Jeong-chul [in ‘The Age of Shadows’] because he can play a wide range of roles.”

In “The Age of Shadows,” Song plays Lee, who formerly worked for the independence of the country, but later becomes a Japanese police officer.

Song defined his character Lee as “a person who is formed by the [tragic] era.” The 49-year-old actor added, “The biggest virtue of this film is that it does not see people back in those days in black and white but it looks into the diverse ideologies and conflicts that people had.”

Song continued, “Kim and I exchange our feelings and find out what both of us want [for each scene.] Sometimes it is hard to explain art with specific words.”

Meanwhile, Kim chose “irony” as a common theme found in all of his films.

“I find myself attracted to irony all the time. And the character of Lee is ironic himself. He approaches Kim Woo-jin as a Japanese police officer but his initial plan falls through and he can’t easily make decisions between the two groups.”

“The Age of Shadows” is the first Korean-language film to be financed and distributed by Warner Bros.