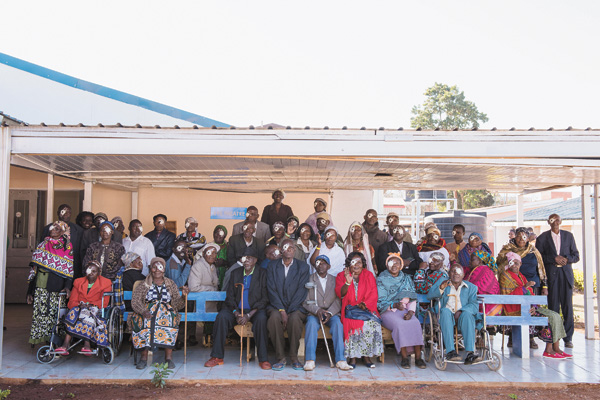 Kenyan patients who received eye surgery from Korean doctors pose for a group photo in the backyard of a provincial hospital in Kenya’s Machakos County on Aug. 18. [JOSEPH LEE]

In mid-August, a 70-year-old woman in a provincial hospital in Kenya’s Machakos County saw her daughter again for the first time in three years.


After a long embrace, she said, “I want to look at my daughter all day, and I want to bake bread with her.”


The woman lost sight in both her eyes when she was diagnosed with cataracts three years ago, but she was unable to get proper medical treatment until meeting her Korean doctors.


“We can barely eat with the money we earn from farming,” said the daughter, “so we couldn’t even think about paying for medical bills.”


One day in August, doctors from a Korean international relief organization called Vision Care treated 55 patients with cataracts in Machakos, and they were all able to see again. In order to help people from developing countries who had lost their sight due to cataracts, Dr. Kim Dong-hae, 52, the director of Myung Dong Saint Mary’s Eye Center, first organized the group in 2002. Since then, Vision Care has performed free eye surgeries for about 17,000 people in 34 countries in South America, Asia and Africa. 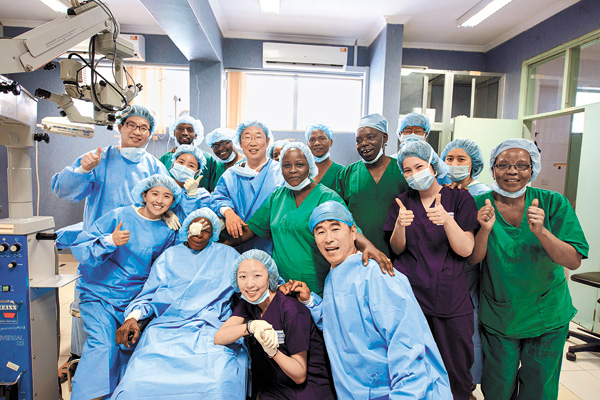 Korean medical team pose for a group photo with local medical team at Muhimbili National Hospital in Tanzania on Aug. 10 after finishing an eye surgery together. [JOSEPH LEE]

“Cataracts is a condition that can be fixed within 20 minutes with a simple operation,” said Kim. “But because of shortages of medical doctors in Africa, many do not have any chance to have such an operation.”

Machakos has a population of over 2 million people, but only one local eye doctor.

“So many patients who lose their sight from various medical conditions that I can’t even count them all,” said Helen Jukie, Machakos’ sole eye doctor. “Because patients swarm the hospital, all too often they have to sit around and wait for a long time.”

This year, Vision Care launched a new project called “Let’s Make Africa Brighter,” during which the group travelled across 8,000 kilometers (4,970 miles) giving medical care to locals, starting from South Africa and going to Swaziland, Mozambique, Zimbabwe, Zambia, Malawi, Tanzania, Kenya and Uganda. It was an expansive 56-day journey that began on July 4 and ended on Aug. 28. The project was made manageable as two to three Korean eye doctors and nurses took turns in each of the nine countries. About 400 Africans were able to recover their sight as a result of their efforts.

The journey was an uphill battle. The group woke at 6 a.m. every day to set up their equipment so they could treat patients until late at night. Most places they visited had no water supply plants and it was common for the locals to bring water from the city’s underground water supply. There were also times when the electricity or water was unexpectedly cut, forcing the team to spend many nights without a bath.

“There was no heating system in our accommodation in Zimbabwe,” said Kim Eun-yu, a volunteer and daughter of Kim. “It’s a country of high altitude and it was winter when we were there so we had to put on our surgery gowns to keep ourselves warm at night.”

“When we were being held at the border,” Kim said, “we had to eat cup noodles with cold water. It took about 20 minutes for the noodles to soften.”

Vision Care prepared for six years for this project, donating 10 million won ($8,981) in cash and 100 million won worth of medical equipment and medicine to each of the hospitals they visited. When performing surgeries, team members also shared medical techniques with local doctors.

“A Korean doctor can perform eye surgeries on six people in the time it would take us to conduct one,” said Kajayo Francis, a nurse from the Machakos County’s local hospital. “It was a big help learning all those methods.”

Vision Care’s voluntary work also made the front page of newspapers in Swaziland and Tanzania. “I hope the mutual assistance does not stop and we want to continue to help improve the medical techniques and technologies by cooperating with nations,” said Kim. “Continuing our efforts, we are also coordinating another project to help countries in western Africa.”