Priorities for the G-20

Priorities for the G-20 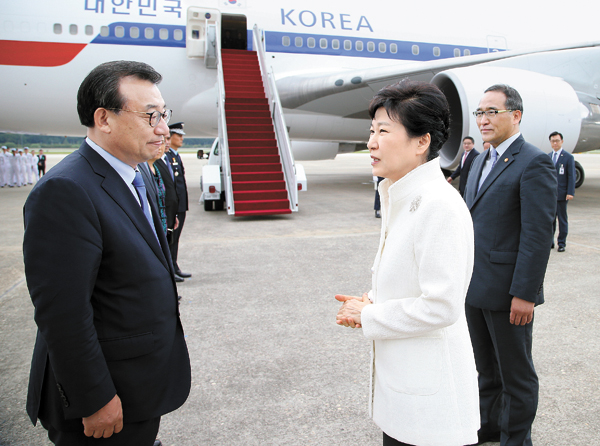 President Park Geun-hye boards the presidential plane on Friday to start an eight-day journey to Russia, China and Laos. Park will attend a Group of 20 summit in Hangzhou, China.[JOINT PRESS CORPS]

Leaders of the Group of 20 major economies gather in Hangzhou, China, this weekend. The G-20 fought the global meltdown in 2008 through concerted policy efforts and recently has been endeavoring to solve the fundamental problem of a slow-growing global economy and enhancing growth potential.

The world economy is going through a long, dark tunnel. The global economy is estimated to growth 3.1 percent this year and 3.4 percent next year, far from the over-5-percent pace before the 2008 crisis. The annual growth of global trade has slipped below 3 percent from a post-crisis level of more than 7 percent. The surprising British vote to leave the European Union dealt an additional blow to the weak economy and the international scene has gotten more unpredictable and complicated with immigration and terrorism problems. Some governments pursuing policies for their own national interests by reinforcing trade barriers have added insecurity to the global front. The G-20 must exercise leadership and coordinate joint efforts to set the global economy on a stable growth path.

The G-20 must address three issues to play such a role.

First of all, we must find a new engine for future growth. The G-20 this year has been discussing innovation as a key agenda item. Most members agree that innovation is essential as a key engine for sustainable development and growth to enhance the productivity of the global economy and create new jobs. An outline for innovative growth will be presented at the summit meeting.

This agenda is in parallel with the Korean government’s campaign for a creative economy. We plan to share our policy experiences of nurturing startups and small and mid-sized ventures, as well as our vision to explore new innovations for future growth, through 17 innovation centers across the nation.

Second, governments must pursue structural reforms with the will and eagerness to fundamentally change their economic systems. The G-20 this year has agreed on areas of priority and guidelines on action plans for structural reforms. The nine areas of priority for reforms include four reform agendas in public enterprise, labor, education and the financial sector that Korea has been pursuing.

Our reform direction is in line with the global trend. We have been making progress in carrying out reforms in the four areas. In the public sector, a performance-based pay system has been implemented in 120 public enterprises to strengthen management efficiency. We expect the pay system based on performance and abilities to spread to the private sector. Progress has been slow in the labor sector due to delays in related bills. We desire fast action from legislators.

Third, the G-20 must reaffirm commitments to the universal values of free trade so that the entire world could benefit. Globalization has contributed to easing poverty and improving living standards. But there is skepticism about it amid widening income gaps, job insecurity, and increased financial volatility. Still we must not let ourselves be swept up in a random, populist temptation to close borders. We must try to bolster the benefits of free trade and ensure the gains are spread equally for symbiotic growth. The role of the G-20 is crucial. The G-20 must proclaim opposition to all types of protectionism.

We were moved by the scene of a runner helping up another lying on a track after taking a heavy fall at the women’s marathon in the Rio Olympics. We applauded the way the players helped each other instead of leaving one behind. The G-20 also must work together towards the common goal of innovation, structural reforms, and recovery in the global economy through increased trade.


*The author is Korea’s deputy prime minister for the economy and the minister of strategy and finance.