Revised growth of 0.8% better than expected

Revised growth of 0.8% better than expected

But the seasonally-adjusted growth of 0.8 percent, compared to the previous quarter, is far from exciting as it means that the country’s economic growth was below 1 percent for three consecutive quarters despite a series of stimulus measures. 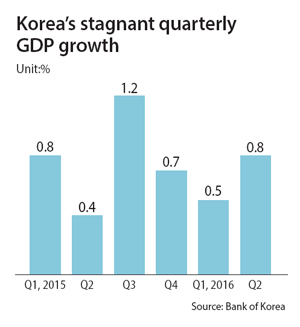 The second quarter’s gross national income, also announced Friday, further dampened the mood as it was the first downturn in seven quarters.

The latest gross domestic product figure is 0.1 percentage point higher than the preliminary reading announced in July. Compared to a year earlier, the real GDP increased 3.3 percent during the April-June period.

The central bank attributed the upward revision to increased domestic consumption and investment in construction.

“New data obtained after the preliminary announcement contributed to increasing gross domestic product in the second quarter,” said Kim Young-tae, a director at the Bank of Korea. “Domestic consumption and construction investment, in particular, showed signs of improvement.”

Domestic consumption rose 1 percent compared to the previous quarter due to increased spending on cars. To spur domestic growth, the government enacted a series of measures including a consumer tax cut on cars and the designation of a holiday in the first half of this year, though the tax cut ended on June 30.

Investment in construction jumped by 3.1 percent as development projects took shape in the second quarter.

But economists said that Korea’s economic growth is still tepid.

“The base for domestic consumption is weakening as represented in indexes showing households’ prospects for income and employment,” said Jeong Yong-taek, an economist at IBK Securities.

“Some indexes show a positive increase, but we should keep in mind the indicators were calculated amid the government’s stimulus measures and favorable events such as the launch of the Galaxy Note7,” he said. “But questions remain about the durability of the trend without any special factors.”

The gross national income rate that measures the value of all goods and services produced stood at 391.7 trillion won ($352.5 billion), down 0.4 percent from the previous quarter.

The decline is the first since the third quarter of 2014.

The central bank said that the downturn was caused by unfavorable trade conditions.

However, Moody’s painted an optimistic prospect for the corporate sector on Friday.

The ratings agency said that Korean conglomerates in refining and chemicals will improve over the next 12 months. “The credit profiles of companies in the refining, chemical, telecommunications and auto sectors will remain generally robust or stable over the next 12 months, owing to robust earnings and/or sizable free cash-flow generation,” said Yoo Wan-hee, a Moody’s vice president and analyst.