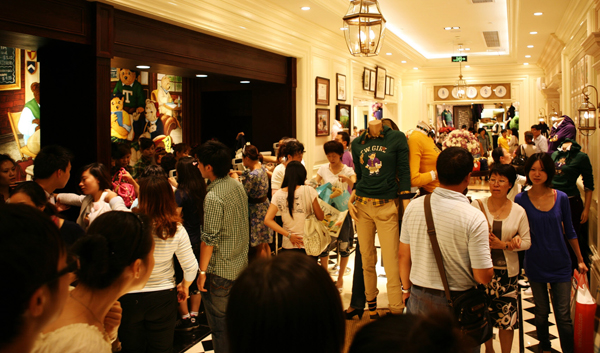 A Teenie Weenie store in Shanghai crowded with customers. [E-LAND]

Teenie Weenie, the casual apparel brand famous for its adorable teddy bear logo, has been sold for 1 trillion won ($894.98 million), adding to the growing number of fashion labels being snapped up by Chinese companies as the popularity of K-fashion surges in China.

The Korean apparel retailer E-Land said Friday that it sold its Teenie Weenie label to China’s V-Grass. However, it will still own 10 percent of the fashion brand’s shares.

“We have decided to keep the stake in the fashion brand to create a synergy effect by maintaining our relationship with China’s V-Grass even after the selloff,” said Lee Gyu-jin, E-Land’s executive in charge of M&A.

E-Land said the deal is significant because the company has secured the capital it needs and has acquired a strong Chinese partner. There are 1,300 Teenie Weenie stores in China. Last year, the brand earned 421.8 billion won while generating 112 billion won in operating profit and 86.3 billion won in net profit.

E-Land initially was expecting to sell Teenie Weenie for between 1.3 trillion and 1.5 trillion won. However, the company settled for 1 trillion won to quickly improve its financial situation. E-Land has recently been selling assets in Hongdae and Gangnam.

“Including the 1 trillion won from Teenie Weenie and the real estate at 400 billion won, we will be able to lower our debt ratio from the current 300 percent to 200 percent,” said Lee.

V-Grass was established in 1997 and specializes in high-end women’s fashion.