Samsung will replace all Galaxy Note7s

Samsung will replace all Galaxy Note7s 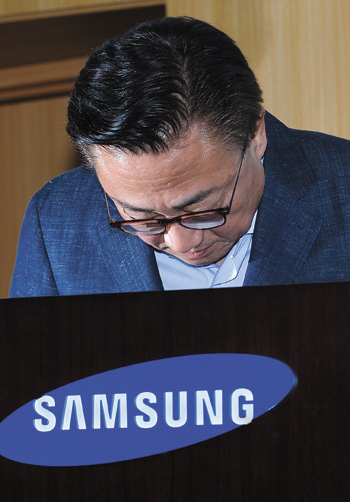 Samsung Electronics suspended sales of the Galaxy Note7 and promised to replace sold phablets with new ones at the request of customers, which could lead to the largest ever recall in the smartphone industry.

The decision came nine days after the first Galaxy Note7 melted spontaneously due to a defect in its lithium-ion battery. More instances were reported in the following days.

“We apologize for the concerns inflicted on customers due to the inconvenience caused by the burning incidents not long after the new product was released,” said Koh Dong-jin, Samsung Electronics’ mobile business president on Friday.

“As of Sept. 1, 35 cases have been reported to [Samsung] service centers in Korea and abroad. This is 24 defective units out of 1 million units. In our analysis of the cause, we have found that the problem was in the battery cell.”

The free exchanges of new Galaxy Note7s are expected to start on Sept. 19.

Service centers will check if the battery on a newly purchased Galaxy Note7 is defective or not through a software program. But a customer whose phablet’s battery turns out to be fine can still request an exchange for a new one.

Samsung Electronics said it expects more than 1 million units to be swapped.

Customers who wants refunds instead can apply for them in the usual way. By law, refunds are allowed within 14 days of purchase. In addition, Samsung said it has decided to extend the refund period after discussing the situation with mobile service providers, as the Galaxy Note 7 is a product with obvious flaws.

The Galaxy Note7 has been sold in 10 countries including Korea. A total of 2.5 million units have been purchased and 1.4 million have been delivered to customers. In Korea alone, 400,000 units have already been sold. It is estimated that it will cost Samsung Electronics roughly $750 million if it exchanges all 2.5 million units.

The world’s leading smartphone manufacturer was planning to start selling the Galaxy Note7 in Europe, including the U.K., on Friday. Phablet sales have been suspended in Korea since Aug. 29.

Before units started melting, the product was considered a major success for Samsung.

The first incident was reported on Aug. 24 when a customer described online how the new phablet exploded while charging. It was just five days after the first sales in Korea on Aug. 19. A series of similar reports were made. There have been eight cases reported in Korea alone.

The most recent incident was posted online on Friday by a housewife. She uploaded a picture of a melted back panel with the insides exposed. She said the phablet started to heat up while she was going through her Instagram account with the battery charging.

Soon after a crackling noise was heard, smoke rose and the phablet started to melt. The woman said the experience had shaken her up.

Samsung Electronics’ acknowledged that the cause of the problem was a defect in batteries that occurred in the manufacturing process.

Despite Samsung’s bold offer to exchange all sold Galaxy Note7s for new ones, the sluggishness of its response have done damage to its image.

The Galaxy Note7 has earned the nickname “Death Note.”

That would have sent a message to the public that the safety of its consumers is Samsung’s top priority.

On the stock market, Samsung Electronics’ shares rebounded after inching up 0.63 percent from the previous trade to 1,597,000 won.

On Thursday, when the government announced it may investigate the Galaxy Note7 problems, the share price fell more than 2 percent, falling below the 1.6 million won mark for the first time in 11 trading days.