Fighting to bring back the first mass-printed book

Fighting to bring back the first mass-printed book 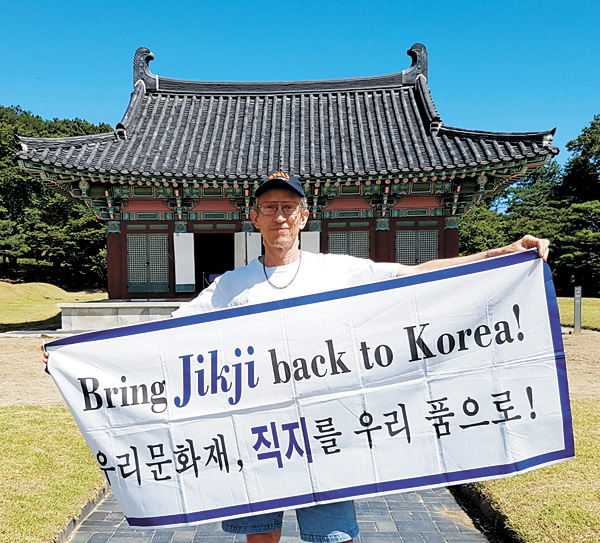 Richard Pennington, an American petitioning for the return of “Jikji” to Korea, holds up his campaign’s banner on the grounds where the Heungdeok Temple, the book’s printing site, once stood in Cheongju, North Chungcheong, on Aug. 27. [RICHARD PENNINGTON]

For the past four years, Richard Pennington, an American editor in Seoul, has been waging a campaign to urge France to return “Jikji Simche Yojeol” to Korea.

Also known as “Jikji,” the relic is the world’s oldest extant book printed with movable metal type, published in 1377, long before the Gutenberg Bible in 1455.

“Jikji” was printed in two volumes at the Heungdeok Temple in Cheongju, North Chungcheong. The first volume has been lost, and the second is preserved at the National Library of France.

After the France-Korea Treaty in 1886, the French minister to Korea at the time, Collin de Plancy, took “Jikji” to France, and it was donated to the National Library in 1950 after his death.

“Jikji” has been kept there ever since, even after it was added to Unesco’s Memory of the World register in 2001.

The 63-year-old Pennington first came to Korea in 2007 to work as an instructor at an English hagwon (private academy) and since 2009 has been working as an editor at an international patent and law office in Seoul.

“Reading a book on Korean history, I was surprised to find out that ‘Jikji’ was published at the Heungdeok Temple 78 years before the Gutenberg Bible,” Pennington said. “I visited the Cheongju Early Printing Museum only to find that ‘Jikji’ was not in Korea, so I started the campaign to get it back to Korea.”

In June 2013, Pennington formed a team with two Korean acquaintances to urge the return of “Jikji” to Korea, taking charge as the campaign’s leader. He has sent several letters to the French Embassy in Korea, the National Assembly, the Cultural Heritage Administration, the Blue House and other groups, telling them about the need to bring “Jikji” back.

“It was sad that Koreans, the actual owners of ‘Jikji’, were in fact more passive toward the problem,” he said.

Whenever he has time, Pennington gathers signatures to petition for the return of Jikji, carrying around a banner that reads, “Bring Jikji back to Korea!”

Taking his cause to famous sites in Korea such as the National Museum of Korea in Yongsan District, central Seoul, and the Haeinsa Temple in Hapcheon County, South Gyeongsang, he has so far gathered around 5,000 signatures.

Pennington is planning to gather signatures at the Jikji Korea International Festival currently being held in Cheongju through Thursday to celebrate the city’s heritage as the birthplace of movable metal type printing.