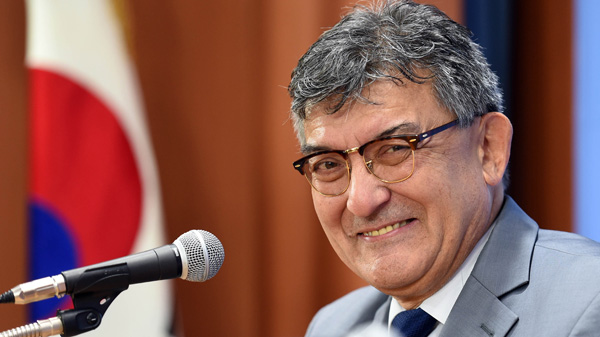 Kamen Nam, descendant of General Nam Yi and son of Nam Seung-beom, a late professor of Kim Chaek University of Technology in Pyongyang, gives an interview in the briefing room of Gyeonggi Provincial Government Building on Aug. 29. [NEWSIS]

When he set foot on Korean soil on Monday for the first time in his life, the 59-year-old Kamen Nam could scarcely contain his feelings.

The son of a Bulgarian mother and a North Korean father, and currently a geology professor at Sofia University in Bulgaria, his trip to South Korea began with an invitation from Gyeonggi Governor Nam Kyung-pil, who was touched when he heard the story of Kamen’s family. What’s more, the two happen to be descendants of the same ancestor, General Nam Yi.

Kamen’s father, Nam Seung-beom, studied in Bulgaria right after the Korean War with a group of other injured soldiers who were also sent to communist nations in Eastern Europe for recovery and education.

During his five years there, Seung-beom met Ekaterina, the woman who would become Kamen’s mother, at the rehabilitation center.

In 1959, two years after Kamen’s birth, Nam was repatriated to lecture at Kim Chaek University of Technology in Pyongyang.

“After my father was sent back, mother learned Korean and worked as a secretary at the Bulgarian embassy in North Korea so she would see him,” says Kamen. “I was still young back then, so I stayed in Bulgaria.”

But Seung-beom and Ekaterina’s days together in North Korea didn’t last long.

“There were negative remarks about the 38th parallel in my mother’s book ‘Korea,’” said Kamen. “As a result, my father was forced to step down from his position as professor and my parents were put under a lot of pressure by the government. Two years later, she returned to Bulgaria.”

Kamen’s mother and father never saw each other again.

Kamen appeared in a press interview on Monday with his half-sister, who requested anonymity. She was born when Kamen’s father remarried another woman after he was repatriated to North Korea. The interview was held in the briefing room of Gyeonggi Provincial Government Building.

“I still remember my father,” said Kamen at the interview. “He gave me my surname ‘Nam.’”

Kamen also said that being together with his sister during the interview warmed his heart.

After the interview, he visited General Nam Yi’s grave to pay his respects. Kamen is to lecture at the 21st Century Gyeonggi Hope Forum and visit the Imjingak Pavilion and Dorasan Observatory in Paju Gyeonggi, and the DMZ before returning to Bulgaria on Saturday.