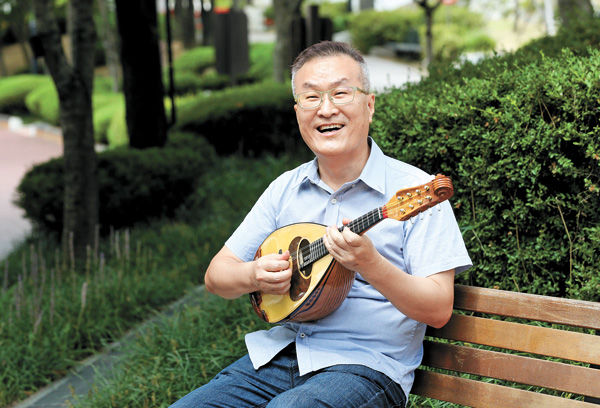 Kim Byung-gyu, a 60 year-old mandolinist, smiles with his mandolin. He said that he is enjoying a happy latter life after finding his interest in the musical instrument. [CHOI JEONG-DONG]

For 90 unbroken minutes, a beautiful harmony made by 1,000 musicians filled a concert hall in Jamsil.

Among them was Kim Byung-gyu, 60, who played the mandolin, a small lute-like instrument with a pear-shaped body.

“I am sixty years old,” Kim said after the performance, “so I am really grateful for the opportunity to be part of a team involving young, talented musicians.”

Kim is one of the few mandolinists in Korea with official degrees.

The performance, held at Lotte Concert Hall last month, was the culmination of a passion he discovered in the second chapter of life after quitting a company at the age of 39. His first career as an engineer appears to have nothing to do with his musical passion.

“When I worked as an engineer,” he said, “I developed a GPS system capable of detecting errors in elevators. I was up all night for several days to make the system. But the company dismissed the work, saying that it is too new.”

The incident made him turn his back on the company.

At the same time, he wanted to live a life pursuing that made him happy. He was fond of the sound of the mandolin ever since he first heard it during his college days.

“I always wanted to work until 40,” he said, “After that, I want to live the second phase of life with my mandolin.”

He said that the mandolin’s sound always puts his mind at ease and relieves his sadness.

To learn the instrument, Kim decided to apply to the University of Padova in Italy where Ugo Orlandi, a renowned Italian mandolin specialist, instructs.

The college traditionally does not accept students above 26 years old, but he received exceptional admission since the college acknowledged his passion.

At first, he practiced for 4-5 hours a day but later increased his practice time to 15 hours. Kim not only studied the background of music itself, but also examined its historical aspects and the life of composers. He sometimes made pilgrimages to landmarks linked with the history of the mandolin.

He finally graduated after four years, although many other students taking the same course took seven years.

After returning to Korea, he devoted most of his time to playing the instrument and promoting the mandolin.

“We live only once,” he said. “The first chapter of my life was centered around my family, but the second one will be about me.”