Ahead of trip, Park defends Thaad decision for Russians

Ahead of trip, Park defends Thaad decision for Russians 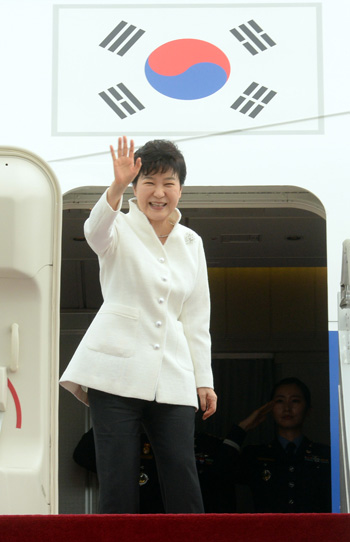 President Park Geun-hye waves as she boards the presidential plane to fly to Vladivostok on Friday. [JOINT PRESS CORPS]

President Park Geun-hye reiterated that her government’s decision to deploy a U.S.-operated advanced missile defense system in the country was “an inevitable defensive measure,” saying there would be no need for such a system if nuclear threats from North Korea were eliminated.

“The essence of the issue (over the Terminal High Altitude Area Defense system) comes down to nuclear and missile threats from North Korea. We would have no need for the Thaad system should there be an elimination of nuclear threats from North Korea,” said Park in a written interview with the Russian state-run news agency Rossiya Segodnya, which carried the interview Friday morning.

Publication of the interview came on the same day Park embarked on an eight-day trip to Russia, China and Laos, where, on the sidelines of global meetings, she will hold a series of bilateral summits with the leaders of Russia, China and the United States.

In a reference to a backlash from Beijing and Moscow - which believe that the Thaad system will be used by Washington to spy on them - Park said there would be no reason to use the missile defense system to target a country other than North Korea.

“Neither would there be a reason to mobilize Thaad to target a third country nor would any positive outcome come out of doing so,” she said. “We have no intention whatsoever to use Thaad for such purpose.”

Park’s defense of the Thaad system, which will be deployed by the end of next year, came after Beijing warned of economic retaliations against Seoul for its decision.

Park stressed that Pyongyang’s provocations pose a grave challenge to the security and peace of the region and urged Moscow to join international efforts to rein in its nuclear ambition.

“As a member of the UN Security Council and a strong advocate for the nuclear non-proliferation regime, Russia is in a special position to lead international sanctions to pressure North Korea (into giving up its nuclear program),” said the president.

On an economic development plan for Russia’s far eastern region pushed by Moscow, Park said she wanted the two countries to expand economic cooperation in various fields to develop the Russian Far East, which has a territory nearly 28 times the size of the Korean Peninsula, but only 2 million people.

Park will have a summit with her Russian counterpart Vladimir Putin Saturday on the sidelines of the Eastern Economic Forum (EEF) in the eastern port city of Vladivostok.