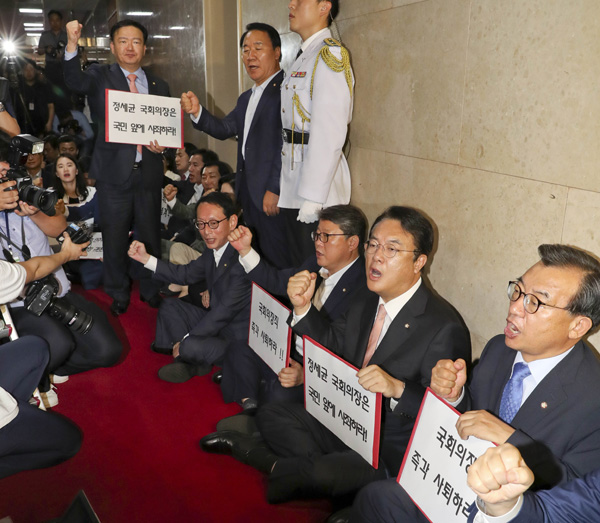 Lawmakers of the ruling Saenuri Party stage a sit-in protest in front of the office of Assembly Speaker Chung Sye-kyun on Friday to press Chung to issue an apology for his opening remarks at a session Thursday. [LIM HYUN-DONG]

In a compromise, the Saenuri Party agreed to return to parliamentary activity on the condition that Vice Assembly Speaker Park Joo-sun - not Chung - preside over a vote to pass the 11 trillion won ($9.8 billion) supplementary budget, which was supposed to have been voted on Thursday. The supplementary budget bill was passed with 210 approvals, no objection and 7 abstentions at a voting session that began around 7 p.m., presided over by Vice Assembly Speaker Park. Park belongs to the minor opposition People’s Party while Chung is technically independent but was a member of the Minjoo Party.

The vote for the supplementary budget, which the government says is needed to boost growth of the economy by 0.2 percentage points, was delayed when Saenuri lawmakers stormed out of the Assembly’s main hall Thursday bristling at Chung’s speech commemorating the opening of the 20th National Assembly.

In his speech, the veteran politician called on the Assembly members to set up a special independent investigative body to prevent crimes and corruption by senior government officials, touching on an ongoing scandal involving Woo Byung-woo, senior presidential civil affairs secretary, who is accused of embezzlement and abuse of power. Setting up such an investigative body is opposed by the Saenuri and supported by the opposition Minjoo Party.

The Speaker also remarked on the deployment of a U.S.-operated missile defense system, known as the Terminal High Altitude Area Defense (Thaad) system, saying the way the government was handling the issue was driving inter-Korea relations toward a dead end, incurring the wrath of the Saenuri members, who collectively left the chamber.

The parliamentary paralysis looked as though it would continue into the weekend as the Saenuri and Speaker Chung remained apart until Friday afternoon.

While Chung, who won his sixth-term by defeating former Seoul Mayor Oh Se-hoon of the Saenuri for Jongno District in Seoul in the April general election, agreed to express his regrets “to the people,” the Saenuri demanded Chung drop the term “to the people” in his apology, a demand intended to make Chung’s statement sound more directed to the Saenuri Party. Chung rejected the demand.

Tension rose Thursday night when dozens of Saenuri lawmakers stormed the Speaker’s Assembly office, going so far to yell at him and demanding his immediate resignation, saying he had lost credibility as the speaker by breaching the codes of conduct by expressing political views in the speech.

Sitting before Saenuri members, Chung said, “You all have crossed a line of protocol. What are you all doing in here?”

The Saenuri also demanded the six-term lawmaker hand over his presiding authority to Vice Speaker Shim Jae-cheol, a Saenuri member, saying it would be the only way the party would agree to return to the Assembly’s main conference hall to vote on the supplementary budget.

While the Assembly Speaker is required to abandon his party affiliation for political neutrality, two vice speakers can keep theirs.