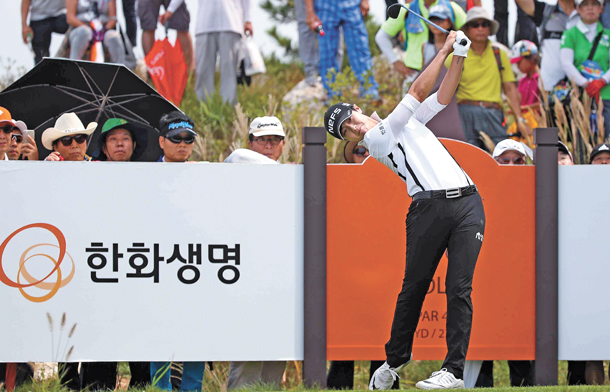 Park Sung-hyun tees off during the final round of the Hanhwa Finance Classic 2016 of KLPGA on Sunday. Park finished the tourney at 6-under 282 to take her seventh title of the season. Adding 300 million to her purse after the win, Park should have no problem setting a new KLPGA Official Money record. [KLPGA]

At its sixth year, the Hanhwa Finance Classic took place at Golden Bay Golf & Resort in Taean County, South Chungcheong. The tournament attracted attention even before the tee off, however, as LPGA’s Lexi Thompson, a U.S. golfer who is ranked fourth in the world, came to participate in the event under invitation.

Park, the winner, did not start off the tournament on a high note, going 2-over 74 during the first round on Thursday to finish the round tied at 35th. It seemed she would need a miracle just to finish within the top 10. But Park did just that and more.

The 22-year-old golfer started strong on Sunday, taking a birdie at the par-4 first hole. But the birdie effort was for naught as she recorded a double bogey immediately following at the par-3 second hole. Will Park have to wait to take her seventh win this year? The gallery started to ask this question. But just when they thought the trophy had slipped out of Park’s hand, she proved everyone wrong by eagling the par-5 fourth hole, resuscitating her shot for the win.

But Ko Jin-young, Park’s rival of the season, was not going to let Park get away with an easy win. At the end of the day, the duel between the two turned out to be as intense as they come, with the final result remaining unknown until the last moment.

After Park finished her round, she headed to the practice green to prepare for the possible playoff, regardless of how slim the probability for it might be, while awaiting the final result. Ko was in a group right behind Park. But when Ko bogeyed the 17th hole, Park’s victory seemed almost inevitable. The 18th hole was considered one of the toughest holes of the course and Ko would have to pull off the performance of her life to nail a birdie there. The pressure was simply too much for Ko, who saved par to wrap up the tour.

“I really wanted the win and I think that paid off,” Park said after her win had been decided. While some doubted she could pull it off, Park herself stayed optimistic throughout the tournament. “I pushed myself thinking I could narrow down the gap eventually,” she added.

Park, whose goal this season was taking five KLPGA wins, had already reached the feat and beyond, with seven trophies under her belt now. When asked about her next goal, she answered, “I will do my best to take my eighth win of the season.”

The defending champion, Haru Nomura, withdrew from the tournament while Thompson finished the tourney sixth at 2-under 286. Win or lose, Thompson showed off her power to add excitement to the competition, averaging 266.33 yards to top the driving distance of the event. Park was closely behind Thompson at 265 yards on average.