Next steps for global financial markets

Next steps for global financial markets 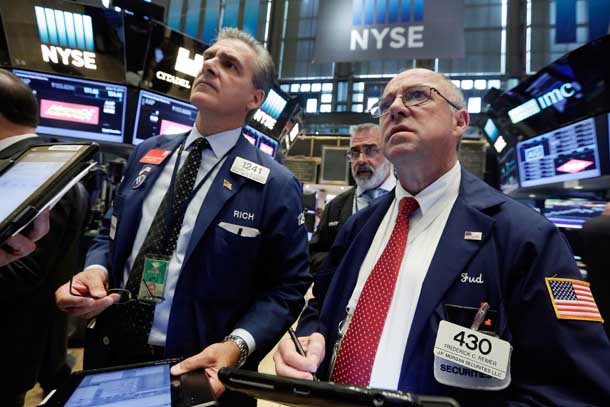 Traders work on the floor of the New York Stock Exchange in June as investors waited to see what the Federal Reserve would do with interest rates and awaited the fate of Britain’s membership in the European Union. [AP/NEWSIS]

Global growth is weak, and will be eroded further by Brexit. Oil prices are low, and likely to plunge further. The world has excess capacity and a wage-depressing labor surplus. Corporate profits are shaky. And deflation is laying bare the impotence of central banks. So where would you logically expect financial markets to be going, given that economic, financial and political environment?

The 10-year Treasury yield has been flat for months, as has the dollar against the euro. Commodity prices in general and oil in particular have risen this year. Money has poured into emerging market bonds as well as junk bonds, depressing their yields. How can current security prices be justified in the face of the fundamental picture, at least as I see it?

Well, maybe they can’t. The most likely outcome to my mind is a major market correction to bring prices back into line with economic fundamentals. Distortions such as negative interest rates and slow economic growth in the face of super-aggressive monetary policies in many countries suggest that things are way out of alignment, and that the resolution may be a very painful process, and a big shock for many market participants.

Nevertheless, there may be some forces at work that might help explain current market conditions even if they don’t justify valuations, which in turn could lessen the blow of an abrupt reversal.

U.S. stocks may still be cheap despite historically high price/earnings ratios. Looking at dividend yields on the S&P 500 index against those available on 10-year government debt, equities remain attractive.

Investors may also take comfort once the U.S. presidential election is settled with a win for Hillary Clinton. Despite all of her baggage of dishonesty, raw ambition and pandering for votes, she’s the devil they know — and maybe preferable to Donald Trump, the devil they’ve yet to see in action.

There’s also the prospect of a fiscal stimulus program to revive growth. With even central bankers admitting that monetary policy has failed to generate meaningful economic growth, the pressure on politicians to do their bit will grow, in the euro zone as well as the U.S.

Once a new President is in place, infrastructure spending might be a feasible middle ground for both political parties. The U.S. certainly needs major refurbishing and expansion of roads, bridges, public transportation and other infrastructure. The most recent Global Competitiveness Ranking from the World Economic Forum rates the U.S. third overall in competitiveness but 13th for infrastructure quality as a whole, 14th for roads, 15th for railroads and 16th for electricity supply system. It’s estimated that aging roads and bridges are costing an extra $377 annually per driver. Infrastructure spending would not only create jobs and economic activity but also enhance lagging productivity.

The National Association of Manufacturers calls for major infrastructure spending of $100 billion per year for each of the next three years. It noted that outlays grew 2.2 percent per year between 1956 and 2003, but fell 1.2 percent annually from 2003 through 2012. Total spending for roads and streets fell 19% between 2003 and 2012.

Even if the political climate improves after the election, and the spending taps are turned on in the U.S., investors may still be too relaxed about the outlook. The VIX index, a measure of expected future stock market volatility, remains at historically low levels. The S&P 500 index is up about 6.2 percent this year.

But Europe offers an example of what might happen if things reverse. The region’s benchmark Stoxx 600 index is down more than 5 percent this year, erasing almost all of 2015’s gains. In this environment, investors should hold universally-large cash positions until there’s a clearer picture of what comes next.


*The author is president of A. Gary Shilling & Co., a New Jersey consultancy, and author of “The Age of Deleveraging: Investment Strategies for a Decade of Slow Growth and Deflation.”