No prelude to the collapse

No prelude to the collapse 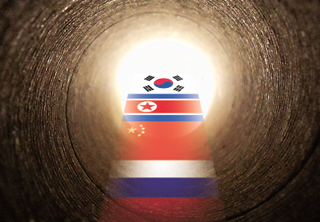 As North Koreans are escaping their country en masse amid the international sanctions against their homeland, the argument for the collapse of North Korea is gaining momentum. The escape of 13 North Korean restaurant workers in China in April was highly featured by the media. But what excited the North Korea “collapsists” in Seoul and Washington was the defection in August of Thae Yong-ho, North Korea’s deputy ambassador to the United Kingdom, and his family. This year alone, as many as nine lower-level North Korean diplomats have defected to South Korea or other countries. Among them, Thae is the highest-ranking diplomat to defect.

The operation to bring in Thae was also uproarious. He was sent to a U.S. military base in Germany escorted by two fighter jets of the British Air Force. From there, Thae and his family came to Seoul. The British intelligence agency MI6, which initially confirmed his intention to defect, alerted the U.S. Central Intelligence Agency about the finding. It appeared that experts of the CIA met with Thae first and decided not to bring him to the United States because they found no valuable information from him.

The decision is understandable. As he served in foreign missions for more than a decade, he could hardly have sensitive information about the North’s internal situations and Kim Jong-un’s latest experiments with the politics of fear and a series of missile launches. But the collapsists in South Korea attached symbolic meaning to Thae’s defection because a high-ranking North Korean diplomat chose to defect to the South amid the fierce tensions between the two Koreas.

Are the series of defections of North Koreans living overseas a prelude to the collapse of the North or a regime change? We can find the answer in the recent precedents of the two Korea’s history.

In the 1970s, during the Park Chung Hee administration, Choi Duk-shin, a former South Korean foreign minister and retired general, defected to Pyongyang. A foreign minister is one of the most important leaders of a country, incomparable to a deputy ambassador.

In the mid 1970s, Rep. Kim Hyung-wook, former director of the Korea Central Intelligence Agency (KCIA) — arguably the second most powerful official in Seoul after the president at the time — defected to the United States. He went so far as to give testimonies before the U.S. Congress to denounce the dictatorial rule of President Park.

Around the same time, Lee Jai-hyon, then director of the Korean Information Service in the United States, had an interview with the Washington Post and criticized the Park regime. He then defected to the United States. He was in charge of the Park government’s missions to entertain U.S. scholars and journalists to justify the need for Korea’s “Yushin” constitutional amendment by Park, but he condemned the government’s authoritarian policy as he testified before the Congress with tears.

Kim Sang-keun, a counselor of the South Korean Embassy in Washington dispatched from the KCIA, also defected to the United States after handing over all the communications the agency’s Washington chapter had with Seoul to the FBI and the Fraser Committee. He also testified against the Korean government at the U.S. Congress.

From New York, a KCIA-dispatched counselor in charge of surveilling Kim Hyung-wook, rushed to Washington and gave his information to the FBI and testified before the Congress.

The Korea-U.S. relations were at a crisis after the mass defections of the key officials. But the Koreagate, triggered by the series of incidents, quietly subsided after 1978. In December 1979, the leader of South Korea was changed — not because of the defections, but because of the greedy power struggle between the director of the KCIA and the chief of the Presidential Security Service.

North Korea faced a series of defections on its own in the 1990s. After the Soviet Union and the Eastern Europe’s communist block fell in 1991, many North Koreans believed that their country would soon collapse. As a rush of defections came to leave the sinking ship, the climax was the defection of Hwang Jang-yop, the architect of the Juche ideology, in 1997. But North Korea survived the crisis and remains firm today. Are there any differences between the past and present? Only the young North Korean leader’s politics of fear, strong international sanctions and the estranged Pyongyang-Beijing relations.

But it is foolish to jump to a conclusion that those circumstances will soon bring about a collapse of the North or a change of the North Korean leader. We cannot rule out the possibility of Kim Jong-un facing an assassination attempt by an ally — if he goes too far with his politics of fear. But when we take into account the unrivaled unpredictability of the young ruler of North Korea, maintaining a hardline policy toward the North solely based on the anticipation of its collapse is very dangerous.

As the JoongAng Ilbo’s Peace Odyssey 2016 confirmed last month during its trip to the Russian Far East, there is no doubt that the constructive path to resolve the current crisis lies with the economic cooperation among the two Koreas, China and Russia.