Chainsmokers credits The Fray as co-writers

Chainsmokers credits The Fray as co-writers 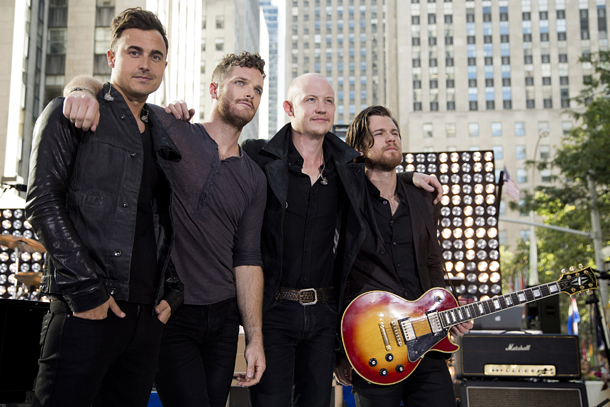 NEW YORK - Two members of the rock band The Fray are now credited as co-writers on The Chainsmokers’ No. 1 smash, “Closer.”

When it was released this summer, “Closer” drew comparisons to The Fray’s 2005 hit, “Over My Head (Cable Car).” Now, the listing for “Closer” on the website for performance rights organization ASCAP includes Fray lead singer Isaac Slade (third from left in the photo above) and guitarist Joe King (far left in the photo).

A representative for The Fray confirmed that Slade and King are co-writers of “Closer.” Reps for ASCAP and The Chainsmokers wouldn’t comment.

The Chainsmokers include Andrew Taggart and Alex Pall. The EDM duo’s other hits are “Don’t Let Me Down,” “Roses” and “Selfie.”

“Closer” was also co-written by Taggart, Shaun Frank, Frederic Kennett and Halsey, who sings on the track. “Over My Head” peaked at No. 8 on the Billboard Hot 100.

Last year Sam Smith gave Tom Petty and Jeff Lynne writing credit on his mega-hit “Stay With Me” after some said it sounded like Petty’s 1989 song, “I Won’t Back Down.”

Mark Ronson and Bruno Mars did the same thing last year for their worldwide hit “Uptown Funk” _ they extended credit to the five writers of Gap Band’s 1979 hit “Oops Upside Your Head” because of similarities.

Both “Stay With Me” and “Uptown Funk” won record of the year at the Grammy Awards in 2015 and 2016, respectively. Most famously last year, a jury awarded Marvin Gaye’s children $7.4 million after finding Robin Thicke and Pharrell’s “Blurred Lines” copied their father’s hit “Got to Give It Up.” A judge later cut the verdict to $5.3 million.