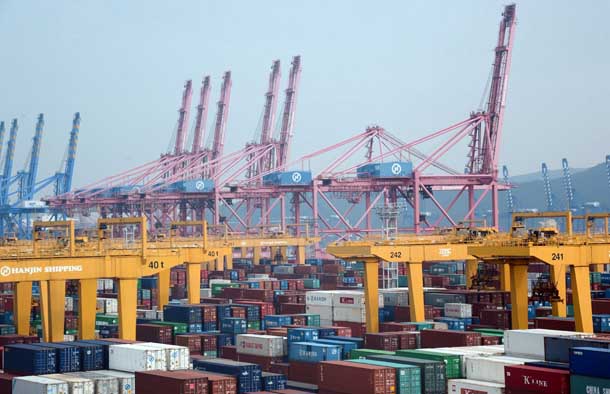 Hanjin Shipping’s 68 vessels were reported to have been stranded at 44 ports around the world, four days after the cash-strapped shipping company filed for court receivership after failing to receive additional help from its main creditors.

The troubled company operates a total of 141 vessels.

According to Hanjin Shipping and the Ministry of Oceans and Fisheries on Sunday, 61 container carriers and seven bulk carriers have been either seized or refused to enter or leave the 44 ports located at 23 countries, including Singapore, the United States and China.

In order for Hanjin Shipping’s vessels to leave port, they need help from contracted companies to load and unload the containers on the ships.

But the contracted companies are refusing to do their work out of concern that they will not be able to get paid.

Hanjin Shipping’s loaded vessels were refused entry to ports because there are no subcontractors to help them unload the containers. At some locations, Hanjin Shipping has voluntarily not entered the harbor because of the possibility that the ship might get seized by creditors.

“If the seized vessels are not released as soon as possible,” said Kim In-hyun, a professor at Korea University Law School, “there will be a major blow to Korea’s economy.”

Kim added, “It is vital for containers loaded on the Hanjin Shipping vessels to find their way to their destinations.”

According to industry experts, there are two ways to resolve the current crisis.

First, the contracted companies that are supposed to unload or load the vessels have to get back to work or the creditors have to let go of the seized ships.

Second, Hanjin Shipping can request what’s called a “stay order” from each country’s local court, which suspends the judicial proceeding of a certain case if a judge grants the request. It typically takes three to four days for the request to take effect. Hanjin Shipping started filing the requests on Friday, a day after the court receivership was decided.

“Hanjin Shipping should have started the process right after they decided to go for court receivership,” said Kim.

Generally, if a shipping company is on the verge of fallout, they prepare all the paper work beforehand so they can file the request right away to minimize damage, said one industry insider.

“The delay of such action has made the revival of Hanjin Shipping even more unlikely,” Kim said.

The Ministry of Oceans and Fisheries and senior officials from nine ministries held a meeting on Sunday, discussing ways to minimize the impact of the Hanjin Shipping crisis on the local economy.