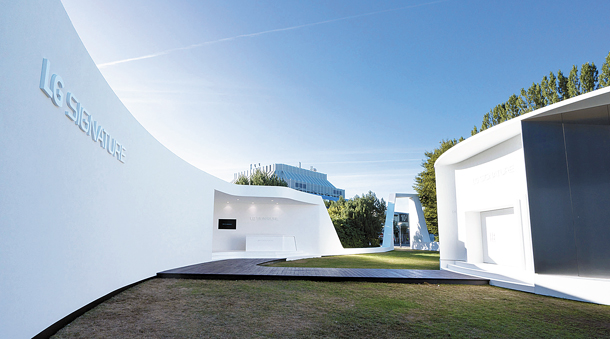 LG Electronics installed its Signature Gallery at an outdoor garden with an all-white box outside the IFA exhibition hall in Berlin. [LG ELECTRONICS]


LG Electronics will expand its business to artificially-intelligent robots to prop up its connected home services, said Cho Sung-jin, CEO of its home appliance unit, on Friday.

Speaking to reporters at the IFA consumer electronics show in Berlin, he classified robots into three categories: social robots designed to hang out in your house like Jibo, the first of its kind in the world; robots that take care of humans in need such as senior adults; and those that replace human in traditional roles at business operations in capacities such as guides at airports.

“We are in the middle of figuring out how to link all of those robots and uses for our business,” he said. “Since human-care robots are closely related to smart home appliances, home appliance unit [at LG Electronics] is preparing for the future business.”

In 2003, LG became Korea’s first company to launch a robot vacuum cleaner. In July, the company signed a memorandum of understanding with Incheon International Airport to supply and operate autopilot robots that are responsible for cleaning and guiding travelers. The pilot service will start at the end of this year, at the earliest. Cho added that the company is considering supplying wall-climbing cleaning robots for high-rise buildings, as well. 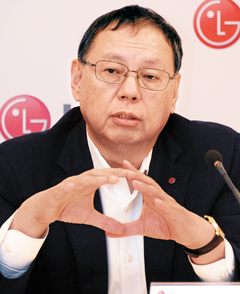 Cho, who has spent four decades at LG, stressed the strategic importance of the Internet of Things (IoT) for the company, which has been rapidly losing ground in the smartphone sector.

Under the brand name SmartThinQ, LG’s smart home system, which operates using the IoT, a range of home appliances from LG as well as other producers will soon be connected to each other and able to be controlled by smartphone apps with the help of a sensor called the SmartThingQ Sensor.

In a related move, the company last Friday signed a partnership deal with Amazon.com so it could use the American e-commerce giant’s voice recognition system, Alexa, for the SmartThinQ Hub smart services.

“We have decided that any product,” he said, “regardless of whether it uses telecoms services other than [our affiliate] LG U+, should be connected to ours.”

At Europe’s biggest trade show for consumer gadgets, LG put a great deal of effort into promoting its luxury lineup, Signature, which it unveiled to the public in March, and which has so far turned out to be quite a successful addition to the home. To promote the series, the company set up an LG Signature Gallery at an outdoor garden, featuring an all-white box outside the exhibition hall along with installation artwork symbolizing the OLED TV, a refrigerator ice sculpture, a washing machine fixed to represent the moon and an air purifier as a raindrop.

“The consumer reaction to the Signature lineup has been much better than expected,” said Cho. “Sales have exceeded up to five times the initial target. We have now reached a stage where we cannot catch up with our massive order volume.”

LG plans to launch the Signature brand in Europe and the United States by the end of this year and in China, South America and Middle East next year.