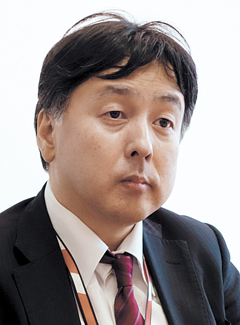 Korea’s shipbuilding industry crisis may spread to the steel industry and there needs to be a plan to be deal with this, said Atsushi Yamaguchi, a senior analyst at UBS Securities in Japan, in an interview with the JoongAng Ilbo.

Yamaguchi is a leading analyst of the Japanese steel industry and has been a member of a panel of experts who advise the government on the steel industry’s restructuring issues.

“Korean steelmakers such as Posco and Hyundai Steel have lots of strengths, since they were built after learning from both the good and bad that Japanese steelmakers went through in the past,” said Yamaguchi during the interview, which took place in USB Securities’ headquarters in Tokyo. “But they might run into trouble even though they performed very well up until now.”

According to Yamaguchi, Korean steelmakers are facing a crisis due to the change in steel consumption per capita. Theoretically, as a country becomes more developed, the average consumption of steel products per person goes up.

Steel industry insiders, however, believe that in developed countries the maximum amount per person is around 800 kilograms (1,763 pounds) a year. Korea already has long surpassed that level and recorded 1,061 kilograms as of 2014.

According to the World Steel Association, the international trade body for the iron and steel industry, Korea is the only country with more than 1,000 kilograms of consumption per person among the 132 states the association surveys. This is mainly due to the continued growth in Korea of the shipping and automotive industries over the past decade.

“A slump in the Korean shipping industry will have a negative impact by the changing steel industry’s supply and demand,” said Yamaguchi. “It should be considered an oversupply, if the amount of outputs exceeds the domestic demand, regardless of global demands.”

He pointed out that there are lots of uncertainties if one relies only on exports, because they tend to be affected by currencies, the global economy and global demands.

Yamaguchi also views the Chinese government’s efforts to restructure their steel industry pessimistically, and predicted that an oversupply of steel products will remain a problem for a quite a long time yet.

“China manufactures more than 800 million tons of steel a year,” he said, “but the biggest steelmaker in China’s share makes only about 44 million tons. This means that merging one or two companies won’t solve the problem. Moreover, some 95 percent of Chinese steelmakers were state-run back in 2000 and now about 55 percent of them are run by the government. The Chinese government might try to reduce their facilities investment in them, but their steelmakers will continue to play the chicken game [where they will have others collapse before they do].”