[Venture Abroad] Hot app shows texting is out, video messaging is in

[Venture Abroad] Hot app shows texting is out, video messaging is in 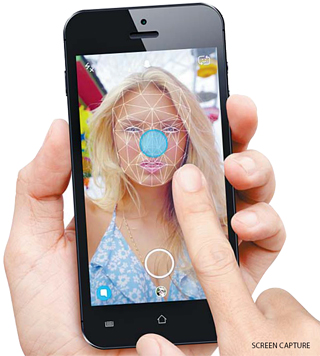 Snapchat scans the photo of the user when the user presses the screen and holds it over the face for a few seconds before it enables application of various filters and real-time video editing features. [SCREEN CAPTURE]

KakaoTalk is Korea’s No. 1 leading messaging application but outside of Korea, Snapchat has been massively popular in the last couple of years - particularly among teenagers and millennials in the United States who were raised on smartphones.

“Tech industry insiders have this consensus that the era of text messaging is gone and video messaging is coming,” says Michael Chong, CEO and founder of Seerslab, developer of video selfie app Lollicam. “KakaoTalk is a bygone format already.”

Behind Snapchat’s success is its functionalities that make communication more of a game. The app allows users to send subtitled selfies and short videos referred to as “snaps” that are creatively transformed and adorned with the help of various in-app options. Users may swap faces in a photo or video, transform themselves into zombies and animals and cough up rainbows.

The multimedia features are available through an array of facial tracking and recognition as well as real-time video processing technologies, which were once considered challenging and cutting-edge. Snapchat did not build the technologies on its own but opted for the strategy of absorbing them through a series of acquisitions.

Concerned over the decline of content sharing on its own platforms, Facebook in March acquired MSQRD, a real-time face-swapping and filtering app. The top social network’s $3 billion acquisition offer for Snapchat was spurned in 2013.

“Snapchat definitely does have capabilities akin to apps in the social networking and messaging app categories,” eMarketer said in an August report. “But with a camera as its front door, the app is best thought of as a utility for visually capturing moments that matter and communicating them creatively in a private or semiprivate way.”

Notably, MSQRD comes from the Belarusian start-up Masquerade - a rare nationality in the global start-up scene. Released in December last year, the app entered the global spotlight after U.S. late-night TV host Jimmy Kimmel used it on his show in February and the number of users of the app exceeded 20 million by mid-March.

Korea has similar apps - Lollicam and Snow, each released last year. They are bracing for a global challenge too.

By July, Snow downloads surpassed 40 million, mostly from Korea, Japan, Taiwan, the Philippines, Vietnam and China. That prompted its mother company Naver, Korea’s top portal site and search engine, to spin off the unit and foster it as yet another subsidiary aimed at the global audience.

Outside of Korea, however, Snow carries a dishonorable nickname, “Snapchat clone,” due to apparent copycat filters with negligible modification. Users point to the dog filter as the foremost example.